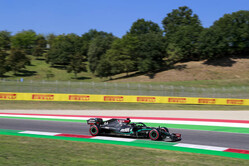 All the drivers used the P Zero Red soft tyre from start to finish of qualifying, so the top 10 will all start on this compound. After the first stint, there are several options. With a new circuit and a close margin between a one-stopper and a two-stopper, there could be a variety of quite different race tactics tomorrow - which might make a crucial difference.

Mugello is an old school track with small run-off areas that are unforgiving of mistakes. Given the two red flags during FP2 yesterday, a safety car could be very possible tomorrow - and the team strategies have to be ready to react to that.

Max Verstappen has also been consistently fast throughout the weekend so far, able to closely match Mercedes in both qualifying and race pace.

With Mugello being a brand new circuit where it's not so easy to overtake, with high speeds and close gaps as well, strategy is going to be all-important: especially as tyre wear and degradation is expected to be quite high. That degradation, on the Red soft tyre in particular, will be key to the strategy.

Both a one and a two-stop strategy are possible, but as always, the teams will try to complete the race with just one stop: especially those in the top 10 of the grid (all starting on the soft compound).

Based on the tyres that the drivers have available, the one-stopper is slightly slower but very marginal on wear: starting on the soft tyre and then switching to the White hard on lap 22. This is the strategy that the top 10 on the grid seem likely to go for.

The slowest - but more flexible - one-stopper will be a medium-hard strategy, switching tyres on lap 26. As always, these strategies can all use the tyres in a different order, depending on individual race circumstances.

Mario Isola: "It was another warm day at Mugello with the tyres providing good performance. Already in Q1 yesterday's new track record was broken, before being lowered further in the final session. All the drivers in the top 10 of the grid have chosen to start the race on the soft tyres, which obviously has an effect on the race strategy. Controlling degradation on the soft at the beginning of the race will be crucial, and this will help to decide if it's a one or a two stop race, with several different strategies possible. The soft tyres were used from start to finish of qualifying today, but the harder compounds will definitely come into their own tomorrow, especially for the drivers contemplating a one-stop strategy."