First blood to Bottas at Mugello 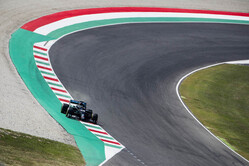 With this being the first time F1 cars have run here in anger for several years, and certainly the first time since the introduction of the hybrid formula, we should see plenty of action over the next ninety minutes as the teams seek to discover how close their simulators are to reality.

Understandably, there are no reserve drivers on duty this morning.

The lights go green and within seconds there are 13... 14... 15... 16 cars on track, among them the blood red Ferraris as the Italian team celebrates its 1,000th Formula One World Championship Grand Prix, and at its own circuit to boot.

As Hamilton and Verstappen head out, Bottas and Stroll are the only no-shows, though shortly after the Finn follows his teammate.

Indeed, the Finn (on hards) posts the first time of the day, a 1:22.124, but he noticeably backed-off in the final sector.

As Bottas improves to 20.645, Monza winner, Gasly, heads out, followed by Albon.

Despite a tow from Albon on the pit straight, Gasly can only manage a 22.311.

Bottas raises the bar with a 20.540 as Verstappen, Magnussen, Kvyat, Latifi and Ocon head out.

Quickest in all three sectors, Gasly goes top with a 19.859, as the Ferrari pair head out, as does Hamilton.

Leclerc goes fifth (21.333) on mediums while Vettel goes tenth on the hards.

Russell (softs) goes fourth with a 20.696, ahead of Sainz, Raikkonen, Albon and Norris.

The right-front side of Sainz' McLaren is covered with flo-viz, the bright yellow clashing with the car's papaya livery.

Hamilton goes second (19.069), having gone quickest in the opening sector and posted a PB in the second.

At 40 minutes, when the drivers have to hand a set of tyres back, it's: Verstappen, Hamilton, Leclerc, Bottas, Gasly, Ricciardo, Perez, Sainz, Albon and Russell.

There follows several minutes of inactivity, until Raikkonen gets proceedings underway again. The Finn is on softs.

As the Finn posts PBs in the first two sectors, Sainz, Giovinazzi, Norris and Grosjean head out. Raikkonen goes third with a 19.219.

Giovinazzi goes fourth with a 19.322 as Grosjean goes quickest in S1.

The twist, curves and undulations, not to mention the sheer speeds, are going to play particularly heavily on the drivers necks this weekend.

Ricciardo improves from 20.080 to 19.140 on the softs to go fourth, the Australian going purple in the final sector.

As Hamilton begins his first flyer on softs, Ocon goes quickest with an 18.805. The world champion subsequently posts 18.409.

A minor altercation involving Perez and Grosjean, both drivers blaming the other as the Mexican appears to be going very slowly on the racing line.

"There is a problem with the engine," reports Grosjean, "there is no power in turns..." as the Frenchman lists just about every corner on the track.

"Might as well box," says a clearly despondent Vettel, "the tyres are gone." The German is currently 13th, 1.388s off the pace.

With 20 minutes remaining, once again the track falls silent, well almost silent, as Gasly is the only driver on track.

As Gasly pits, his place on track is taken by Norris.

Hamilton heads out, as do Bottas, Albon, Sainz, Stroll and Perez as the race sims get underway.

Gasly is unhappy with Turn 7, but there is nothing the team can do in terms of mapping for now.

A spin for Latifi - he's late today - at Turn 3 brings out the yellows, but he soon gets going again.

Sainz leads the way in terms of laps (32), ahead of Norris, Albon and Kvyat who have all completed 30.

A big lock-up for Norris as he hits the brakes on entering the pitlane just a little too quickly.