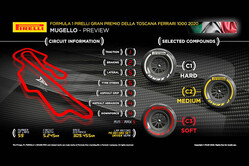 Pirelli is the title sponsor of the first ever Formula One World Championship Grand Prix at Mugello, which also celebrates 1000 races for Ferrari.

The three hardest tyres in the range have been chosen: C1 as the White hard, C2 as the Yellow medium ad C3 as the Red soft. The choice has been made due to the fast and varied demands of Mugello. As this is the first time that Mugello has been on the F1 calendar, the selection has been made to cover any unforeseen circumstances.

In the second week of September, there is still a strong chance of having hot weather: another reason to go with a harder choice, guarding against thermal degradation.

Located in the Tuscan hills, there is a plenty of elevation changes at Mugello, together with a quite narrow track and some bumps. This helps make for an old-school feel to the circuit, inaugurated in its current form in 1974, but with roots going back to a 1914 road course.

The 15 corners are mainly medium to high speed, with no really tight chicanes or big braking zone throughout the 5.2-kilometre (3.23 mile) lap.

The right-hand Arrabbiata corners are the two quickest corners of the track, probably taken flat-out in a Formula 1 car at speeds of around 260 or 270kph (161 - 167 mph).

It is quite a technical layout as every corner is crucial for different reasons: the Luco - Poggio Secco – Materassi complex at the start of the lap is all about maintaining the highest possible apex speed and perfect racing line, while the Biondetti corners at the end of the lap (which almost make up a natural chicane) are vital as a launch pad onto the following lap.

The asphalt at Mugello is famously aggressive, again placing more demands on the tyres. The track was completely resurfaced for the last time in 2011.

The current (unofficial) F1 lap record is held by Rubens Barrichello and Ferrari from 2004: 1:18.704, which is set to be shattered this year. While Mugello has never been used for a Formula 1 race and is better known for bikes, it is an established F1 testing venue.

For the first time this year, there will be fans admitted to a grand prix weekend, with just 3,000 spectators allowed at the second of three Italian F1 races this season.

Mario Isola: "Mugello is a fantastic addition to the World Championship calendar with a particular significance for Pirelli, as it's where we first ran our Formula 1 tyres back in August 2010, just two months after our agreement was announced to supply the sport from 2011 onwards. It's a spectacular and very fast circuit that will definitely place big demands on tyres, which is why we have selected the hardest compounds.

"As with any new venue, Mugello represents a bit of an unknown for most of the drivers and an entirely clean sheet of paper when it comes to strategy. Free practice will be particularly crucial to collect as much data as possible, and we're likely to see teams splitting their programmes to gain as much information as they can about every tyre under all circumstances.

"From our point of view, we've been able to prepare also by analysing data from our other championships that have raced at Mugello.

"Congratulations to Ferrari for reaching the incredible milestone of 1000 races: just one of the factors that makes the team so iconic in our sport, and worthy of this fitting celebration where we are also delighted to be title sponsor."