How F1 teams prepare for a new track 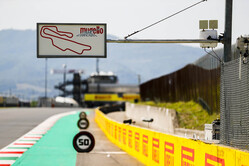 While it has hosted F1 testing, Mugello has never hosted a round of the world championship before. Mercedes lifts the lid on how it prepares for a new track.

Most F1 teams last visited the Mugello circuit for a three-day test in May 2012. Since then, there have been substantial changes to the cars, engines and tyres as well as smaller changes to the track. That's why the teams will treat Mugello as a completely new circuit. They will have a similar approach to the third race in Italy this year at Imola, as well as the races in Portugal, Turkey and Germany and the second Bahrain race.

The first step in the preparation process for a new race is purchasing highly accurate Lidar maps. These 3D maps don't just reflect general layout features like track width or cornering gradients, but also important details like the configuration of the kerbs and details of the track surface.

The maps are accurate enough to be used in the driver-in-loop (DiL) simulator where drivers find the optimal racing line around a lap. Both Lewis and Valtteri have driven the Mugello circuit in the team's DiL simulator in Brackley.

The racing line obtained from the DiL then forms the basis of further simulation work in the automated simulator that the team uses to gain an understanding of the set-up direction of the car. Thanks to these highly accurate simulation tools, the engineers can do a lot of preparation work for a new circuit at the factory, allowing the track-side part of the operation to focus on tyre and strategy work rather than having to concentrate on set-up alone.

In preparation for a race weekend at a track that F1 visits regularly, teams will look at data from previous years to learn from past experiences. However, this data has a certain expiration date. For example, one of the aspects that the team tries to understand before heading to a race is the specific energy management and the deployment maps which the track layout requires. That renders data from before the hybrid era obsolete in preparation of a new race.

From a driver's perspective, coming to a new track is a bit different though. While drivers can use the simulator to learn the layout of a track, they tend to find more lap time on a new track than they usually find over the course of a race weekend, as they experiment with brake points, racing lines and cornering speeds.

Mugello features an unusual track layout with a number of very fast corners as well as a complete absence of slow ones - even the 'slowest' corner (Turn 1) is expected to be taken at an apex speed of around 140 kph (86 mph). Mugello's many fast turns and its fairly old, abrasive tarmac bear some resemblance to Suzuka and engineers use the venue of the Japanese Grand Prix as a reference point for their predictions about tyre life and degradation: both tracks generate a very high sliding energy and put a lot of stress on the tyres.

The section from Turn 6 to Turn 9 will be particularly demanding on the tyres. The four corners (the right-left combination of Casanova and Savelli followed by the two Arrabiata right-handers) are expected to be taken flat which will put very high loads on the tyres. This also presents a challenge for the set-up of the car as teams will try and find a solution that deals with the high sliding energy.

The high-speed, twisty character of the track as well as its fairly narrow width will make overtaking tricky in Mugello, placing a particular importance on qualifying. The best point for overtaking is predicted to be at the end of the long straight going into the 'slow' Turn 1.