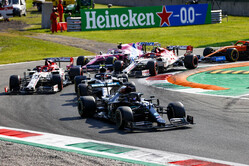 While the ban didn't affect the German team in qualifying, the impact of the ban was felt next day, as Valtteri Bottas sought to recover following his 'disturbing' start, and Lewis Hamilton from his stop and go penalty.

"We always said that, when you create one power mode for the whole race means that you haven't got the extra spice to overtake," said Toto Wolff.

"You haven't got the extra modes that you may decide, or not, to deploy in the race to overtake, and that is valid for all the small teams as for the big teams.

"I think that the race is a consequence of that decision."

"It is difficult to overtake in Monza," he added, "because with this TD (technical directive) on engine modes, you can't just turn it up for the overtakes and you can't turn it up to defend.

"The drive is very good to recover to P7," he said of Hamilton's fight back. "But obviously it's a lost race for him and the team, and this sentiment prevails."

The Briton believes that the ban will lead to less overtaking.

"It's worse for racing in the sense that in the past you could move between modes and you had to manage the small amount of strong race engine mode, because you only have a certain quota," he said. "It was more fun to have to manage with that and manage the power and utilise it for overtaking. That's probably why you see less overtaking than perhaps in the past."

"It could be slightly part of the new regulations that everyone is just running constant mode in terms of trying to save and attack, so maybe there's less overtaking because of that," agreed teammate Bottas. "Even in Monza, the DRS effect is quite a bit smaller because the wing is smaller, and you have less drag.

"For me the core issue was trying to get close to the cars, enough to try and overtake and get like a massive tow. But it definitely felt pretty impossible to overtake any car that I was battling."