"It's something I'll learn from," says Hamilton 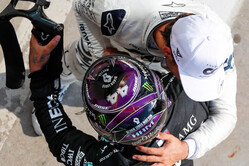 Taking the blame for the mistake that cost him certain victory, Lewis Hamilton says: "What doesn't kill you only makes you stronger".

When Kevin Magnussen pulled to the side of the track, shortly before the pitlane entrance, on the 18th lap of the Italian Grand Prix, initially, because the car didn't appear to pose a threat, the sector was subject to waved yellows.

However, shortly after it was decided to deploy the safety car, at which point Lewis Hamilton promptly pitted. As (second-placed) Carlos Sainz continued, as did the rest of the field, only Antonio Giovinazzi followed the Briton's example.

Rejoninig in second, behind Sainz, the world champion re-took the lead on lap 22 when the majority of his rivals began to pit.

It was at this point that talk of Hamilton pitting while the pitlane was closed began.

No sooner had Charles Leclerc gone off into the barriers in the Parabolica, which was to see the race red-flagged, than Hamilton was warned that he was under investigation, the Briton insisting that there had been no signals.

Shortly after, Giovinazzi was handed a 10s stop and go penalty, as was Hamilton, despite the Briton going to race control to make his point to the stewards.

When the race re-started, though leading, after serving his penalty (on lap 28) the Briton rejoined in last position (17th). The fightback subsequently began.

"My race wasn't meant to be today but what doesn't kill you only makes you stronger," he told reporters. "It was a long pit stop but once I finally caught everybody I enjoyed that bit of a battle.

"I didn't see those boards," he admitted, "and take responsibility for that and it's something I'll learn from. But to get seventh and still get the fastest lap is still some good points so I'll definitely take it.

"And grateful that Max didn't score any points, so not a huge loss today," he added.

Asked why he had gone to see the stewards, he said: "I came back, spoke to the team, they didn't have any video, and I just wanted to see what had been missed.

"I could have sworn on the entry to the pitlane there was no red light," he continued. "It wasn't to see (race director) Michael (Masi), it was to see the other stewards who made the decisions with penalties. They just quickly showed me the onboard, and there were two signs that had an X on it. I actually didn't see them, because I was looking elsewhere.

"Then there was not really much more for me to do, so I just left, went back, got changed, and that's ultimately why I was a little bit late to the grid.

"I don't remember any time coming here that that was the indicator for the pitlane closing," he said of the signs, which were on the left-hand side of the track and not on the same side as the pitlane entrance. "I've never actually known that would be on the left. That was a new experience."

The Briton was also surprised that the pitlane was closed in the first place, feeling that Magnussen's car could have been pushed into a gap in the barriers rather than back to the pitlane, hence the closure.

"I'm generally quite unsure why they pushed the car from that spot which they could have pushed the car back into," he said. "Why the hell did they push it? I know why, but I don't understand why they took that decision necessarily, because that wasn't needed."