"It's my fault," admits Leclerc 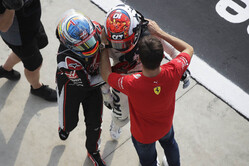 Charles Leclerc admits that his crash at the Parabolica, which played a significant role in turning the Italian Grand Prix on its head, was down to him.

The Monegasque was one of the first drivers to make a scheduled stop, pitting on lap 17, shortly before Kevin Magnussen parked on track, thereby bringing out the safety car.

Rejoining in 17th, when the majority of the field pitted on lap 22 he was up to sixth. However, it was shortly after that he lost the car in the Parabolica, hitting the barriers at high-speed and ultimately causing the race to be red-flagged.

"It was a very difficult race to be honest, I thought we were unlucky with the safety car but we were lucky," he continued.

"With the hard tyres I struggled massively, I tried to push but lost it in Parabolica and crashed. It was just a mistake by my side, it was very difficult to drive prior to the crash but no excuses, it was my mistake.

"I feel quite okay," said the youngster, who, as ever, was taken to the medical centre as a precaution. "A bit of pain here and there, but it should be fine. It is normal as the crash was quite big, but I am feeling okay."

The crash capped a miserable day for the Maranello outfit, teammate, Sebastian Vettel having suffered brake failure just 6 laps into the race.

"It is the worst thing but at least it happened in the best spot," said Vettel, whose suffered the failure at the first chicane. If it happens elsewhere it’s not so nice.

"I completely lost the pressure on the pedal and went straight," he added. "In the laps before I ran into trouble we managed the brakes, but it was obviously quite bad.

"I was struggling," he admitted, "had a very bad start with the hard tyres and lost positions. Then we ran into the problems, had to cool the car, and the brakes failed, so a short race."

As the Italian team heads to Mugello for its celebratory 1000th event, it leaves Monza with a double DNF and slides to sixth in the standings.

For once, Vettel was happy that the race was held behind closed doors.

"This year is very different and I think probably in that regard it is good that there are no fans," he said. "Life is like this. It always depends where you are looking, and I think even if, at the moment professionally, there are not many good things, there are always some positives. So it is just a question of what you focus on.

"Certainly it was tough for all of us because our main focus is on the car and the race, especially racing at Monza. But we have to keep our head up and look forward to next week and to look at the positives, even if there are very few."

Indeed, the double DNF means that Ferrari has completed the least (74.4%) racing laps this season, while Mercedes has completed 100%. The Italian team has also only scored points on 7 occasions from 16 starts.