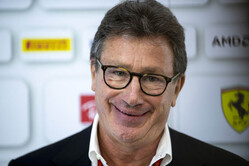 As the Italian Grand Prix grid features no Ferraris in the first five rows for the first time since 1984, company CEO, Louis Camilleri insists he has "total confidence" in team boss, Mattia Binotto.

Back then, Michele Alboreto, starting from 11th, went on to finish second to Niki Lauda (McLaren), while Rene Arnoux, starting from 14th, retired after 5 laps with a gearbox issue.

Today, as the Italian team's struggles continue, Charles Leclerc and Sebastian Vettel will be happy to finish in the points after leaving Spa empty handed a week ago.

At a time Binotto has admitted having self-doubt over his suitability for the role, Camilleri has given the Italian his support.

"I have total confidence in Mattia Binotto and his team," he told the New York Times. "The results aren't there to prove what I'm saying, but these things take time.

"Regretfully in the past, there has been too much pressure and a history of people being let go," he added. "There was somewhat of a revolving-door atmosphere, and I'm putting a stop to that.

"I want to ensure that stability remains in place," he continued, "despite the unbelievable pressure there is on the team, particularly from the Italian media, who are quite brutal at times, calling for heads to roll, but that's not the solution."

Indeed, Camilleri is seeking to change the very culture at the team, which is not the work of a moment.

"We have the talent, work ethic and determination to get there, and I'm confident we will be up there battling again," he said

"I brought in a more long-term strategy, particularly in terms of investments," he added. "Getting people to work more in teams, that always takes a bit of time. You don't change cultures overnight."

While Binotto has warned that it may take "many years" to turn the team around in order that it can mount a sustained challenge for the title(s), Camilleri is confident that the rules overhaul in 2022 will see the Maranello outfit challenging again.

"The situation cannot improve in 2021," he admits. "(But) for 2022, the new regulations come into play, and every time there has been a huge revolution in terms of the technical framework, it can change the pecking order."

Asked about expanding Ferrari's race programme, while admitting that a return to Prototypes is possible, he said that IndyCar is not a certainty.

"In Indy, it depends somewhat on the flexibility in terms of their future regulations," he said, making clear that a move into Formula E is not under consideration.