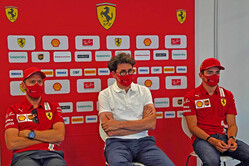 While there's the name, the history, the passion and the glamour, there is no doubt that accepting the role of team boss at Ferrari is a poisoned chalice.

At a time the legendary Italian marque appears to be going through another of its traditional slumps, Mattia Binotto, who was appointed following yet another management overhaul, admits that he had begun to question whether he was actually up to the job.

Talking to Corriere della Sera, the Italian admits that when he was contacted by Ferrari chairman John Elkann in the days after the Belgian Grand Prix, though he never feared his job was in danger he had begun to question his own suitability.

"I know I have the support of my managers," he said. "But I questioned myself, I reflected on whether I can be suitable for the role of team principal.

"I could have done better in some areas," he admitted, "for example the technical reorganisation could have been done earlier.

"However, I believe that my 25 years in Formula One and the knowledge of this company are key elements to doing well in this job," he added.

Brought out of the relative safety and comfort of his engineering role, Binotto found himself having to deal with new priorities, such as the new Concorde Agreement. As a result, other aspects of his role perhaps didn't get the attention they deserved.

"As team principal, the first role is not technical," he said. "We worked on the renewal of Charles, on Sainz's recruitment and on many other fronts.

"It may be that in having less technical focus we were not sufficiently organised with delegating," he admitted, "but let's not forget that I became team principal without notice a year and a half ago. It takes time, all the winning cycles have shown this. When I think back to Ferrari in 1995 and 2000, many things changed. This reorganisation will not be the last."

He was also keen to refute claims that CEO, Louis Camilleri and chairman, John Elkann are not as 'hands-on' as the late Sergio Marchionne.

"It's one of the most wrong things I hear," he said. "I am not alone, I can assure you. I get their advice, surely their style of leadership is different from what we were used to in the past. But I am not alone. I am just not."