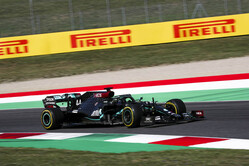 Mercedes driver Valtteri Bottas was fastest in both sessions with Red Bull's Max Verstappen second in FP1 and third in FP2 after Lewis Hamilton and with a gap of just over 0.2 seconds - indicating that we are likely to see a closely-fought qualifying session and race.

So far we noted a slightly bigger gap (0.9 seconds) between Yellow medium and Red soft than expected and a gap of 0.7 seconds between medium and White hard.

The teams and drivers all had their first taste of Mugello in two free practice sessions today, with running to acquaint themselves with the high-speed demands of the Tuscan track, in warm temperatures that exceeded 30 degrees ambient and 40 degrees on track.

The teams sampled all three of the Pirelli compounds available (C1, C2, and C3: the three hardest in the range) with many splitting their strategies in order to accumulate as much information about the tyres as possible, using different fuel loads. This is normal for Friday free practice, but becomes particularly important at a demanding new venue with abrasive asphalt.

As expected, the soft tyre was fastest - but many drivers reported that its optimal qualifying performance was delivered over just one lap, which means that some drivers may choose to start the race on the medium tyre.

The considerable challenge of the up-and-down track layout, allied with the warm temperatures seen today, meant that there was a relatively high degree of tyre wear and degradation seen - particularly on the long runs - which should be the case for the race as well.

Run plans were disrupted by two red flags during the afternoon session and this prevented to collect the usual amount of data.

Mario Isola: "The drivers all enjoyed their first taste of Mugello, with the unofficial track record that was set back in 2004 already comprehensively broken in FP1 and then lowered even further in FP2, on both occasions with the Red soft tyre. We expected tyre wear to be relatively high over the long runs, with high degradation also on the soft and the data we saw in free practice proved that this was the case. Performance-wise we noted a slightly bigger time gap between medium and soft than expected. This will obviously be a crucial factor when it comes to calculating the qualifying and race strategy, together with the data accumulated tomorrow in FP3. The 'green' track we experienced today meant that there was plenty of track evolution, which should continue tomorrow."