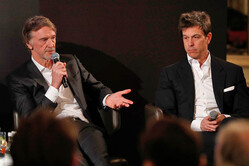 For some time now there has been speculation over the future of the German team, which is on track to secure its seventh consecutive world championship double this year.

The team is 60% owned by Mercedes and 30% by Toto Wolff, while the estate of the late Niki Lauda holds the remaining 10%.

Lewis Hamilton has yet to agree a new deal with the German team, the Briton citing uncertainty over its future and that of Wolff as one of the main reasons for the delay in agreeing a new deal.

For his part, Wolff gives little away, claiming that while he may continue with the team after this year it might not be in the same role.

Bernie Ecclestone has previously suggested that the team would be bought by Lawrence Stroll, a close friend of Wolff, and renamed Aston Martin, while Dmitry Mazepin, billionaire father of F2 star, Nikkita, would buy Racing Point however, this would not now appear to be the case.

Now, former team owner, turned TV pundit, Eddie Jordan - who has a history of making outrageous pronouncements, some of which ultimately prove accurate - claims that British billionaire, Sir Jim Ratcliffe is to launch a £700m buy-out of the team.

"The ownership of the team is going to be taken over by Sir Jim Ratcliffe and Ineos," Jordan tells the Mail on Sunday.

"The Ineos name is already on the side of the car anyway and they have this technological partnership, so this is a nice way out for Mercedes.

"The team will be called Ineos," he continued, "but it will still be run from the factory in Brackley and Mercedes will retain a 30 per cent share in it.

"It will not be known as Mercedes anymore and Toto Wolff will no longer be in charge."

Following reports earlier in the year that the team's parent company, Daimler, Mercedes, was looking to leave the sport, Daimler Chief Executive, Ola Kaellenius was quick to deny this, telling Reuters simply: "not true".

With Daimler retaining 30%, according to Jordan, this would mean Ineos intends buying 30% of the German manufacturer's stake, along with Wolff's 30% and Lauda's 10%.

"We ask for your understanding that we don't comment on rumour and speculation," said a spokesperson for the team.

Recalling the old adage about, 'how do you make small fortune from F1... start with a big one', it seems odd that Ratcliffe would make such a move, particularly at such a crucial time for the sport, what with the major regulation changes in 2022, the uncertainty over Lewis Hamilton, and the desire to level the playing field, not to mention the uncertainty over the pandemic.

At the same time however, at a time the sport is pushing towards a franchise system, owning one of the ten franchises could prove lucrative. Though it is a huge gamble, particularly when one considers the various issues facing the sport in the next decade in terms of the engine rules and the automotive industry's push towards electric.