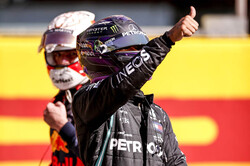 Lewis scored his 95th pole position in Formula One - his seventh of the 2020 F1 season and first at the Tuscan Grand Prix. Valtteri missed out on pole by just 0.059s, securing P2 on the grid - having aborted his final Q3 lap after a double yellow flag in the first sector.

Lewis's pole time of 1:15.144 sets a new record at Mugello. Both drivers will start the 2020 Tuscan Grand Prix on the Soft tyre.

Lewis Hamilton: I'm so happy to be up here. It's been a tough weekend, to be honest. This is a phenomenal track and it's very challenging. You're going through Turns 6, 7, 8 and 9 at around 275 to 285 km/h and the g-forces we're pulling through there is just insane. Valtteri has been quicker than me all through the weekend, so I've been working hard in the background to try and improve my lines and set-up. And finally, I got the lap together that I needed in Q3. The wind picked up a bit for the second lap, which is why I wasn't able to go any quicker, but the first lap was good enough. Valtteri did a great job and has been pushing me really hard, so I'm glad I could pick up the pace once I got to Qualifying. I'm looking forward to tomorrow, it'll be difficult on such a high-speed track but that should also make it pretty interesting.

Valtteri Bottas: It's disappointing to miss out on pole, especially by such a small margin and after I had to abort my final lap. The yellow flags definitely hampered my Qualifying, as I still had more to come with the last lap and was just waiting for the time to get it all right. The first run was okay but not perfect, so I was looking forward to going again but I just didn't get the opportunity. Coming into the weekend, we thought it would be nearly impossible to overtake here but during practice, we've seen how wide the track is and the different lines you can take through the corners. So, I'm hopeful I'll be able to take the fight to Lewis tomorrow and have a good battle. There's a long run to Turn 1 as well, so we'll see what happens.

Toto Wolff: I'm very happy with a 1-2 in Qualifying and locking out the front row. This is such a fast and flowing track, so Qualifying was spectacular - as we expected. We have all the ingredients for an exciting race tomorrow, with both Red Bulls behind us and it's also great to see Ferrari in their 1,000th Grand Prix with a car up in P5. We're flying a little bit blind for the race, with it being a brand-new track for F1. Our long runs in practice actually weren't that long so there are still some unknowns. We'll have to see how the tyres last and whether it will be a one or a two-stop, but there are a few strategic options and it will be interesting to see how it all plays out. I'm really looking forward to a good race tomorrow.

Andrew Shovlin: Well done to Lewis on another fantastic pole position, it's difficult to put the lap together here with so many interconnected corners, but he made a big step overnight and was putting in strong laps all session. It was a frustrating final lap for Valtteri; he'd found good time compared to his penultimate run as he exited Turn 3 but had to abandon the lap due to the yellow flags. Valtteri's been strong here from the word go, so he was frustrated to not get a chance to finish the lap but at least his first lap in the final session was good enough to secure the front row. This is the closest that we've seen Red Bull all year in Qualifying and that normally translates to them being close in the race. They also have two cars up at the front which will give them a few more options. Hopefully it will be an interesting race; it's pretty tough on the tyres and there are quite a few strategies that all end up similar on race time, so I think we'll see some variety up and down the grid in tyre choice and number of stops.