Perez not a "no brainer" for Haas 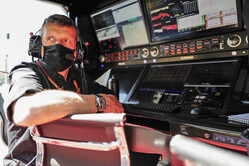 Speaking in Tuscany, his team having committed to the sport by dint of signing the latest Concorde Agreement, Haas team boss, Guenther Steiner said that his team is considering as many as ten drivers as it seeks to decide its line-up for 2021.

With the Italian having previously made clear that his team is seeking consistency and that whoever drives in 2021 would be expected to be on board for 2022 when the new regulations are brought in, it was widely assumed that Sergio Perez - newly released by Racing Point - would figure high on that list.

Indeed, with the Mexican's availability, his experience, not to mention the numerous sponsors he brings with him, one would assume his signing to be a 'no brainer' for the American team.

Not so, says Steiner.

"I think there is more opportunity now with the budget cap coming from next year onwards and the new regulations for 2022. It's a lot more complex.

"For sure Checo is a good driver," he admitted, "I would never doubt about him, but is he the best for the mid-to-long term? I don't know. That is what we are discussing and therefore it's not as much a no-brainer as it seems to be."

Steiner admits that his team could provide a berth for one of Ferrari's young drivers, such as Robert Schwartzman, Callum Ilott or Mick Schumacher.