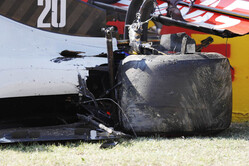 Though his team had a miserable time of it - Kevin Magnussen involved in the accident at the race restart and Romain Grosjean finishing 12th - Haas team boss, Guenther Steiner enjoyed the sport's maiden visit to Mugello.

Along with most drivers, the Italian would like to see the sport return, suggesting that in the future the sport should be more flexible and allow the 'rotation' of some circuits in terms of the calendar.

"I don't know if it's because it was new it was so exciting, or could it be exciting every year," he says. "If you were to rotate them, there could be some of that newness every time we do it. I'm completely for that one.

"I like change," he continues, "if you're always doing the same thing, you always know the outcome of it - it's much more predictable when you do more of the same.

"I think it would be great if we could rotate it, if it's possible commercially, and that's for Formula One to look into. Seeing what happened at Mugello, I'm now really looking forward to the Nurburgring, Portimao and Imola."

Of course, Haas was one of several teams to lose a car in the safety car restart, the Italian believing that the sport could learn a lesson from other series.

"The restart line was far down the straight at Mugello," he said, "and some people obviously took a chance and tried to have a run at it.

"I don't think anybody did anything wrong, I fully agree with that one, it was just circumstances," he added.

"Going forward, to avoid these things, I think we need to look at where to put the restart line and maybe also think about a restart zone,” he suggested, a practice used by NASCAR. "I'm not an expert in these things, but other series do it like that to avoid these things from happening. I think it's worthwhile to look into it, but I'm sure it'll come up on the agenda of the sporting working group."

"The crash happened because some drivers in front of me tried to make a slingshot to gain momentum at the restart crossing the line," added Magnussen. "They opened the gap and accelerated and then realized they had to brake again, which then kicked off the chain reaction down the field.

"It eventually led to some people not being able to react. That's really what happened. The solution has to be a change to the restart procedure otherwise I think it will happen again."

As the American team heads to Sochi, with just one championship point to its name, Steiner doesn't expect a reversal in fortune any time soon.

"It's a tough year for us but we're always trying to do our best," he says. "That is our aim at the moment - to get into Q2. That then gets us into a position where if something surprising happens in the race, we can hopefully take some points away from it.

"At the moment it seems we're just there to create the surprise for other people. Maybe our luck turns and we get something good out of it at some stage this year.

"It will be a tough end to the season," he admits, "in the same way it was a tough start to the season. We obviously have some deficiencies in our car. We also haven't brought any upgrades to the car.

"We are at least fighting every weekend with Alfa and Williams, and I think we can continue to do that for the rest of the season. With a little bit of luck, and some of our own talent, we should hopefully get some points before the season ends."