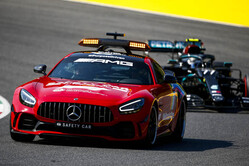 While Italy, for the second successive weekend, provided a Grand Prix that will be talked about for some, the fact is that - not for the first time - the sport came perilously close to a disaster.

Though absolved of any blame for the crash at the restart, Valtteri Bottas' actions at the front of the field as he attempted to fend off his teammate, were to lead to a 'perfect storm', and no sooner had the leaders crossed the startline than it happened.

Waiting his moment to unleash the W11, and with Hamilton filling his left-hand mirror, Bottas backed the field up. However, because the lights on the safety car did not go out until the final corner of the lap the field was more bunched up than usual and the world champion believes this was instigated in an attempt to spice up the action.

"It was absolutely not Valtteri’s fault," he told reporters, "it’s the decision makers that are trying to make it more exciting.

“Today it put people at risk," he continued, "perhaps they need to rethink that. They have been moving switching off the safety car lights later and later and later. We are fighting for position.

"They are trying to make it more exciting but today was a little bit over the limit but Valtteri did exactly what anybody would do.”

Hamilton's comments come days after F1 MD, Ross Brawn, clearly inspired by events at Monza, suggested now is a good time to think about introducing reverse grids. Again, a means of spicing up the show and a move which has been widely condemned by fans, drivers and team bosses.

Asked directly if he thought safety was being compromised in a bid to spice up the show, the Briton said: "I don't know... I need to think about it and I don't want to overstep the mark.

"I know the fans were excited with the last race with the re-start and everything," he continued, "and it seems if there is a piece of paper on the track they are going to put the red flag out and do a re-start and I can understand why and that it's exciting.

"Ultimately these races can get boring when everyone strings out and there are such big gaps between everyone," he admitted. "They do it in NASCAR. They put out the yellow flag all the time and safety cars, whatever, all the time to keep the race exciting.

"But they need to take into account the safety aspect. Today was not particularly safe with the re-start. You could almost see that coming. I am sure they will learn from it and we'll move together as a sport."

"Our team opened up the discussion this morning before the race that it is a bit of a concern here," said Bottas, referring to the fact that over the course of the weekend, across the various support races, the lights on the safety car had been going off later and later. "But they said basically they are going to keep doing it because it is better for the show.

"We are allowed to race from the control line, which has been there for a while," he added, referring to the rule. "The difference this year is they are putting the safety car lights off quite late so you can only build the gap pretty late on.

"So in the lead you try to maximise your chances and I'm not at all to blame for that. I was doing consistent speed until I went. Yes, I went late, but we start racing from the control line, not before that. So the guys behind who crashed because of that, they can look in the mirror. There is no point whining about it.

"I don't know who decides what happens with the safety cars, FIA or F1, but they are trying to make the show better by turning the lights off later so you can't build the gap earlier and then go like hell the corner before the race start and down the main straight. Maybe it's time to think if that's right and safe to do so."

"Then if Valtteri doesn't go when they think he is going to go, that is when the concertina happens. It's dangerous but it's predictable.

"The top five were almost doing a double-formation start because we are all waiting for the take off. It's dangerous. Tracks like this are always going to be difficult with the long straights. But definitely something could have been done better."