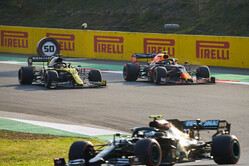 As he battled for his maiden F1 podium appearance, Alex Albon admits to having had "flashbacks" of his costly encounters with Lewis Hamilton.

Aware that this was his big moment, Alex Albon gently reeled in Daniel Ricciardo in the hope of securing his first F1 podium.

As he sized up the Australian however, at the back of his mind were his encounters with Lewis Hamilton in Brazil last year and again at this year's season opener, when clashes with the world champion proved costly.

"I had the Lewis flashbacks going into the corner," he told Sky Sports after the race, "but Daniel left enough space and it was all OK.

"It was good, obviously a while to get here" he subsequently told reporters. "But it was a tough one, we had to work for it. But I'm really happy, it feels nice to be here.

"We just couldn't get off the line, so most of the overtakes had to be done on the circuit," the Thai driver continued. "But our car is good on the brakes so we know we can do moves like that. It's fun to drive."

On this, one of the most physically demanding tracks on the schedule, the youngster admits he was somewhat thankful for the unscheduled stoppages.

"It was surprisingly OK," he said, "I was expecting it to be worse... but we did have two red flags so that did help it. It's brutal, especially the high speed in sector two, you feel it. I think there was more adrenaline going into my body than anything else so I'm happy."

"I knew if I could hold on to him for a few laps maybe it would hurt his tyres," said Daniel Ricciardo of the battle with Albon. "I knew because he disposed me pretty quickly I thought, alright, that's probably done.

"But also in the back of my mind I was like, 'OK, the kid's never been on the podium before, if I try to do anything to put pressure on him and force him to keep driving at a high pace maybe something could happen'.

"I saw a few times he put a wheel a little bit on the gravel out of Turn 5 so I thought maybe he was over-driving or getting nervous but like the first five laps (after getting past) he had too much pace for me to do anything."