Vettel will "raise the team to a different level" says Szafnauer 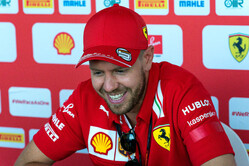 As Racing Point morphs into Aston Martin, Otmar Szafnauer says the four-time world champion will "raise the team to a different level".

"We've been talking to him for quite some time and the final decision was made just before the announcement," confirmed the Racing Point boss. "It wasn't an easy call to make, because Checo has served us well. He's a great racer, a quick driver and is a safe pair of hands on a Sunday.

"It's a compliment to Checo that we had to deliberate so long on whether to take a four-time World Champion with all the experience that Seb brings or stay with Checo," he added.

Asked what the German will bring to the team, Szafnauer is in no doubt.

"He will raise the team to a different level," he said, "and I'm sure it will be 1000 little things that he will help us improve that can then take us to a new level.

Referring to the decision to drop Perez, and how difficult it will be to finally say adios to the Mexican, he said: "It will be tough...

"Checo is a good guy and a great racer who served us well over the years," he continued. "He's great on a Sunday and he's got quicker with his one-lap pace on Saturday. He was always reliable too.

"He's a true professional and we look forward to the remaining races with Checo. We hope he can go out on a high and hopefully race against him in the future.

"But when a four-time world champion like Sebastian becomes available, that doesn't happen every day or every year, and we had to consider our options deeply. We have aspirations to move the team forward and we're working hard back at Silverstone to invest in all areas of the team to get the infrastructure and resources where they need to be.

"With Sebastian, I know what he will bring a massive amount to the team. It's all the experiences gained in winning four World Championships and 53 races - and we want to learn from that."