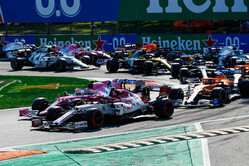 Ever the purist, Sebastian Vettel argues the a move towards things like reverse grids is "testimony" that the sport has failed.

Surprisingly, in his latest PR piece for the official F1 website, Ross Brawn doesn't seize on any of the events that conspired to make the Tuscan Grand Prix another afternoon of marvellous motorsport mayhem as inspiration for the sport moving forwards, unlike his suggestion, post-Monza, that reverse grids are the way to go.

One can only hope that the outcry from drivers, team bosses and Ross's favourite - the fans - have caused the F1 MD to think again.

However, just in case the poacher turned gamekeeper hasn't got the message, four-time world champion, Sebastian Vettel, shared his thoughts.

"I think it's completely wrong," said the German. "Obviously, it's a testimony that if you are pushing in that direction, it is a testimony that you have failed to come up with regulations and tools that bring the field more together and make racing better on-track.

"As a reminder, we had new front wing regulations which cost everybody a fortune," he continued, "but ultimately haven't changed much in terms of racing.

"I think it would be wrong," he insisted. "The hopes are on 2022, I guess, for the regulation changes, but I think we need to fix that and address the main points rather than try to play the lottery.

"As a competitor, I think as much as I don't like other people to win, I have to accept if other people win or do a better job. Therefore I think it would be wrong in the name of sport to try and mix things up that way."