Perez clears the air with his team 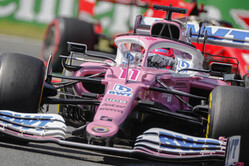 Sergio Perez has held 'clear the air' talks with Racing Point after claiming that certain things are being "hidden" from him ahead of his departure from the team.

Speaking on Thursday, the Mexican said that he was being left out of the loop, a move which he fears could compromise the outfit's battle for third in the standings.

"Obviously since the news came out, some people inside the team tend to hide things, which I don't think is great," he said. "I think at the moment we just have to be as transparent as possible to make sure we achieve our goals, and make sure that we score as many points as we possibly can."

Earlier today, the Mexican took to social media to say that following his comments yesterday, he had cleared the air with the team.

"I have known this team for seven years and they are like family," he wrote. "I have spoken to the team and they accept my explanation.

"There's no way after seven years we can finish in bad terms, the air is totally cleared," he added. "We all move forwards now. We all want the same thing: to score as many points and be successful in our remaining races together. We will push and go for more podiums in these final races together."

Looking beyond those remaining races, the Mexican has yet to find a bersth for next season.

"There has been obviously contact with a couple of teams and talks," he told reporters yesterday. "I think in the next week or so, I will know exactly what is a realistic option, and what isn't. But obviously that is something I will keep between the teams and myself.