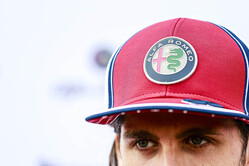 While Antonio Giovinazzi appears to be a shoo-in for a second season alongside Kimi Raikkonen at Alfa Romeo, the team is giving little away.

Along with Red Bull, Toro Rosso and Williams, Alfa has yet to confirm its full line-up, thereby offering a ray of hope for those drivers still without a confirmed contract.

Speaking at Suzuka, though he spoke favourably of Giovinazzi, Vasseur refused to confirm his team's line-up.

"We will take the decision quite soon," he told reporters. "But, if you have a look at the last event I think Antonio is doing a very strong job, he was matching Kimi in the last six or seven qualifyings in a row. He was in front in Sochi.

"OK, the first lap was not a good one for us," he added, "but he's doing the job and he's improving step-by-step I'm very confident with Antonio."

The only possible alternative is Nico Hulkenberg, who Vasseur signed to Renault during his time with the French team, however, speaking on Thursday the German didn't hold out much hope.

Asked if there was any news, he said: "No, frankly not. There's no news, so it's a little bit more of a patience game, so I'll have to and see a little bit longer."

Asked about his options if an F1 drive is not available, he replied: "Pizza baker?

"In Formula 1 or in general? General... I guess there is that scenario but to be honest, if it wasn't to continue here, after that, honestly I haven't given it that much thought.

"I think, also for me personally, I would take some time to get clarity over what I want, find a new challenge. Of course I will be in some racing car again in the future because that's what I love doing, it's my passion so I think only time will tell what happens then."

Asked if he had any news, Giovinazzi replied: "Not yet, but I think already as I said many times if I continue with these results, the speed I've shown in the last few races, nobody can take my seat.

"I just need to keep pushing, stay focused on my target, which is to be here next year, and we'll see."