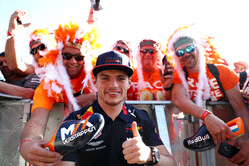 Not only do Chase Carey and the gang have to convince the teams and manufacturers that F1's proposals for the sport beyond 2020 are the best way to go, there is also the little matter of the drivers (and fans).

While the drivers have been given some access to the discussions on the proposed rule changes, it remains to be seen whether the sport will actually listen to their opinions.

Putting aside such issues as levelling the playing field, making it easier for cars to follow one another and weight, proposals such as reversed grids and qualifying races, due to be trialled at three Grands Prix in 2020, have been mostly greeted with horror by the drivers.

Max Verstappen is no different, the Red Bull star fearing that such gimmicks will harm the sport.

"Us drivers had a meeting with the Formula 1 owners," he tells his own website. "We spoke a lot about what we want as drivers.

"Nothing has been decided but we don't want something like American wrestling where everything is artificial and fake," he says. "We made clear that is not what we want.

"I think qualifying is good the way it is. I wouldn't know how to change it."

As for the proposed regulation changes, he adds: "It's looking good. Currently, the cars would be three seconds per lap slower. That's quite a lot. But I think the cars have to be lighter, but that's difficult to do with the hybrid power-units and the batteries."

In terms of whether the playing field should be more level, he says: "Yes and no...

"Formula 1 became popular because manufacturers took each other on. It is also good for the development of road car technology. It's good PR for Mercedes if they beat Ferrari, and for Red Bull Formula 1 is marketing, but it would be good to make it a bit more even... but not completely."

Despite having started the Russian Grand Prix with a 5-place grid penalty, the youngster believes the current system is better than the time penalty suggested by Renault.

"I'd rather have this system than starting the race with a time penalty," he says. "I'd rather start at the back and work my way through the order. It means you've completed your penalty and can go about making the most of a race."

In terms of the current season, he feels it has lived up to expectations.

"I think the first part of the season went better than expected with those two wins," he says. "You'd think it would get even better in the second half of the season but it hasn't really happened for us thus far. The last couple of races weren't great but the start of the season was positive.

"I'm mainly happy that generally speaking, we maximised our points compared to last year," he says of his own performance. "In 2018 we left a lot of points on the table in the first six races. It's been a lot better this year."

Looking back at Honda's woeful reliability when partnered with McLaren, the Red Bull driver has yet to suffer a technical DNF this season.

"I kind of expected to have a few technical DNFs," he admits. "I don't mean that in a negative way, but in a first year with Honda, things can always go wrong. Luckily it's been good on the reliability front. Honda have done a great job with that.

"I remain positive," he adds. "Of course, we expected a bit more but next year is a new opportunity. Everyone is working hard to start the next year well, so let's see."