Haas commits to F1 "for the foreseeable future" 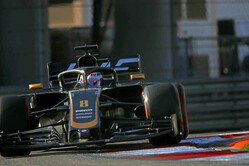 It's fair to say that Haas has enjoyed something of a roller-coaster ride since entering the sport in 2016, the first American team to race in F1 since 1986.

In its first two seasons it finished eighth in the standings before claiming an impressive fifth last year.

This year, though usually competitive on single-lap pace, due to ongoing issues which has seen the team try all manner of solutions, including a hybrid aero package in Russia at the weekend, the team has slipped down to ninth.

While the sport welcomed the team's arrival, a number of its rivals were less than impressed, for the American outfit took full advantage of regulations which allowed it to 'buy in' more components than was allowed before, resulting in an engine and gearbox from Ferrari and a chassis created by Dallara.

Though using Dallara to create the chassis meant a reduced headcount for Haas, certainly compared to other teams, it still meant the creation of a satellite office in Italy, in addition to its UK team base and operational HQ in Kannapolis, North Carolina.

Forbes reveals that the financial statements for Haas Formula, the UK company which provides F1 team support services to parent company, Kannapolis-based Haas Formula LLC, show that in the year to 31 December 2018 the company invested £1.9m ($2.3m) in machinery, vehicles, computer equipment and the race shop in the UK.

At the same time, as the team increased its UK headcount by 14, giving it a total of 92 - a fraction of the numbers employed by its rivals - the payroll increased by 31%.

With the cost of the satellite office in Italy approximately £9.4m ($11.7m), overall spending outside the United States was £105.4m ($130.4m), which was covered by revenue from parent company Haas Formula LLC and the team's prize money.

Between them, the teams receive a 47.5% share of the underlying profits of F1's operating company. This is divided in two, with one half split between the top ten teams in the championship on a sliding scale, while the other half is divided evenly but only goes to those teams that have finished in the top ten in two of the previous three seasons. 2018 was the first time that Haas qualified for this... and is at the core of the ongoing row over whether Racing Point is entitled to a share since Haas insists it is an entirely new team and not Force India in a new guise.

The team also received £67.1m ($83.2m) from external sponsors, including Haas Automation, the engineering company founded by the team's ultimate owner Gene Haas, watch maker Richard Mille and clothing brand Jack & Jones, both of whom contributed around £4m ($5m) according to the Formula Money Sponsorship Database.

This year saw Haas adorned with logos for the controversial energy drink, Rich Energy, though the deal ended just 14 races into the season. Precisely what Rich Energy paid into the Haas coffers should become clear when this year's accounts are filed, around twelve months from now.

The filings state that Haas "has two major suppliers, that contribute a significant portion of the car parts and technical support required for the company's race car development", which clearly refers to Ferrari and Dallara.

Reflecting this, the statements add that the team has "commitments to acquire services" which amount to £46m ($57m) over the next three years, and that the company makes "payments under non-cancellable operating leases" with £17.3m ($21.5m) to pay this year and again next year.

As for ongoing speculation about the future of the team, the financial statements state that "the directors have received confirmation from Haas Formula LLC of its intention to provide such financial support as is necessary for the company to continue in operation for the foreseeable future and at least twelve months from the date of signing of these financial statements". Since this was stated on 17 May this year, it appears to cover Haas for 2020.

Indeed, it should be noted that currently all ten teams are only contracted to race until the end of 2020 and are currently deciding whether to accept new terms. Or not.

Beyond 2020 is anyone's guess, for along with Haas, Mercedes and Renault's long-term commitment as constructors is in doubt, albeit for different reasons.