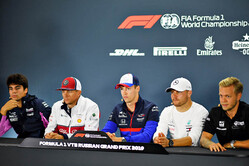 Dany, if we could start with you please. Home race, tell us about the build up, how busy have you been?
Daniil Kvyat: Well, yeah, not too busy. It's a back-to-back race with Singapore so pretty much arrived to Moscow for one day, got a little break, and then here on Wednesday. Had a bit of an event yesterday evening, you know, the usual stuff at the home grand prix and yeah, today just a bit busier than usual, but it's always a pleasure for your home grand prix, so it's OK.

Tell us about the reception you got from the fans when you arrived here in Sochi?
DK: Well, I haven't seen too many fans yet, but we'll see tonight during the autograph session. Yes, I was doing the track walk and a few people definitely were quite excited. I think people love Formula 1 here and it's quite good to see for me. I hope to see a lot of people in the grandstands on Sunday and Saturday, it would mean a lot to me. It would mean also that motor sport in Russia is growing a lot and obviously I'm happy to contribute.

Now, you said after the Singapore Grand Prix that you struggled with the car. What were the issues and how confident are you that you can bounce back here this weekend?
DK: It was a specific grand prix. I mean I wouldn't really say I struggled with the car. I skipped FP3, and then in quali, going straight into Q1, I just maybe didn't put the best lap in because I didn't have much reference and once you start from there it's harder on a street circuit. And then the race, yeah, it was a bit messy. Some moves... I was getting a bit stuck behind people when I had fresher tyres. This year it was usually good for me and then in Singapore maybe it wasn't so good. My mirrors were foggy, so I couldn't really fight with people properly. The race was just difficult to be honest. We had contact with Kimi, but by that point my race already wasn't looking very good. But I was still in contention for maybe a point, but yeah, it was a difficult race. Sometimes they happen and sometimes they are necessary.

Thanks and good luck this weekend. Lance, a big update package for Racing Point in Singapore, how effective was it?
Lance Stroll: Yeah, it's still early days. I think on paper they looked quite positive, we were quite competitive throughout the weekend. Qualifying was a struggle on my part, with gaps and stuff in Q1. So we had a bad qualifying on Saturday but then in the race the pace looked better. Yeah, it was just a messy weekend overall for both cars. Sergio had a technical issue in the race and we had to stop him. I was looking good up until I clipped the wall in my second stint and I got a puncture. It was a messy weekend but I think there's still a lot to come. The early signs are good with the upgrade, things are looking good, but it's about unlocking it to its full potential.

You say the early signs are good, but where is the car better with this upgrade?
LS: It's just general grip. Rear grip is much better, stability is better, and now it's just about getting the right balance with this new upgrade and that sometimes takes a weekend and Singapore is a unique circuit, it's one of a kind, so I'm looking forward to this weekend and the coming events.

Now, you've been involved in some great on-track battles this year. Tremendous last lap in Singapore with Grosjean, Sainz and Ricciardo. How much are you enjoying those battles?
LS: Yeah, it's always fun. Unfortunately at that stage in the race we weren't in a position to score points. It's always fun though. Wheel-to-wheel racing is always good and this year in the midfield it's so tight. We've seen a lot of good fights and close racing in the midfield, so I'm sure it's very exciting for the fans. But unfortunately our race was kind of done at that stage. It was really done after I clipped the wall and I got that puncture. It was exciting and I'm sure it was fun to watch from the outside.

Kevin, you have a great record here - qualified fifth last year and a lot of points finishes at this race track. Can you tell us about the track: what is it like to drive and what do you need from your car to be quick?
Kevin Magnussen: I would say it's a little bit kind of a specific track - lots of medium-speed corners, like 90 degrees. You need a good strong front end here, but as always you need good traction as well, so it's not that you need much of a different car to usual but it's, I think, a pretty good track. It's decent to drive and it offers good opportunities for racing and overtaking. I quite like it.

On the subject of car performance: are you starting to make progress now and do you understand the car now?
KM: I think it's a pretty ongoing process. It's much more important to understand what's gone wrong with this car than to try to come up with quick fixes. It's not lost this year at all, but it's better to focus for next year and try to get as ready as we can and have as much confidence in correlations and stuff like that to produce a better product for next year, rather than, in a desperate way, to try to fix this year's car, because that's going to be a little bit difficult. So the focus is more on different experiments with different packages to try to learn more about correlations and sensitivities and stuff like that. It's a little but frustrating because obviously we'd all prefer to just be maximum flat out, trying to perform the best we can, which of course we are, but at the same time we are spending a lot of energy on experiments.

You mention the word package there. What package are you going to be driving this weekend?
KM: The new one. That's still part of this whole learning process, so I think Romain will stay on the old-ish one, with a few of the new parts. We've gone to a bit of a hybrid car to try to make it possible to swap over and swap between different parts and experiment as much as possible and get as much learning as we can. That part is going well and we are making progress in terms of understanding but we don't see that understanding in terms of lap time. It's hard to show in terms of lap time what progress we are making.

Kimi, frustrating race for you in Singapore, different kind of street track here, with longer straights. How confident are you of having a better weekend?
Kimi Raikkonen: Never know really but I think it should be better for us - hopefully it is. I think Singapore, some points, it felt pretty OK, mainly not, but I think maybe our car is not the best over the bumps and things that you need for Singapore but yeah, let's see how it comes - but I would expect to be a bit better here.

Now Kimi, this is a bit of a landmark race for you. It's race number 307, which takes you to third overall in the most-experienced list. You're surpassing Schumacher and Jenson Button this weekend. When you started out in 2001, did you ever imagine you'd be around for this long?
KR: Definitely not. I think I was wishing to stop much earlier. I kind of stopped it already but no, for sure not. I don't think I had any ideas how long. Hopefully at least one or two years. Things have turned out a bit different - but I didn't really have a plan before, I still don't. We'll try to go good things and as long as we enjoy it, obviously we'll keep racing and see what happens.

Given the competitive nature of this sport, do you take a lot of pride in your longevity?
KR: Not really. I mean, to me, as long as I feel myself that I can drive where I expect to be, and I can do things as I, in my head, I feel I should, then I'm happy to keep going, plus, as long as the racing is the bigger part than all the other nonsense. I don't really think 'Oh, I've done this much racing, and it's a great thing'. For me, the results are much more important than another other fact. Maybe the day you stop, and after a while when you look backwards, it means something. But right now, no.

Valtteri, you have a great record here. First win, 2017, pole last year, looking good for the win until that didn't happen. Why are you so quick here - and how much confidence does your record give you coming into the weekend.
Valtteri Bottas: For sure it gives confidence to come into a weekend when you know previously it's been one of the good tracks for you, so that's obviously a nicer way to start the weekend but always, in every case, you start from zero. Every season, every track changes a little bit, every car is always different every year, so setup, everything is different, so you're starting from zero - but for sure, we have a good mindset coming here, knowing that it's been good in the past. I don't know, just since the first year coming here I've found a good flow on the track and haven't really had many problematic corners or anything, so been on the pace. Obviously, there's always things I can do better this year than last year and that will be the aim.

You say you're coming here with a good mindset but there must have been - tell me if I'm wrong - frustrations after being told by the team, to effectively hold station in Singapore last weekend in the race. What's been said since then?
VB: Well, first of all, that was last weekend. I'm not thinking about that any more coming to this weekend. But if you want to talk about it I can't go into details. Obviously we always review everything by the finest detail with the team, and I was at the factory on Tuesday. We had meetings about that and that we'll keep just for us. Whatever we've spoken about it. We have certain rules, both ways, they're equal. That's how it goes but I just need to make sure I'm not going to be in that kind of situation again.