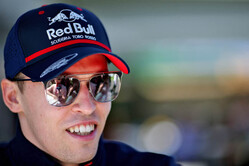 Pierre Gasly: "Before I was in Formula 1, I raced in Sochi in GP2 and finished second behind Alexander Rossi and ahead of Stoffel Vandoorne, but the year I won the GP2 Championship, the series did not go to Russia. Last year with Toro Rosso, we had a bit of a complicated weekend with failures for myself and Brendon (Hartley) at the same point during the race. However, the circuit has plenty of good points, even if a lot of the corners are very similar 90 degree turns, taken at the same sort of speed. The key is to have a car well set up for these types of corners because if it works well here, there's a good chance it will work well in the rest of the track too.

"For me, this will be my fourth race back with the team and so it will be an important weekend. We must make sure that together with the engineers we do a very good job to be in the fight for points. We have been there since Spa and Monza and only a few days ago, I had a really fun and exciting race, scoring four more points to finish in eighth place, which is so important because we want to try and improve our position in the Constructors' classification.

"Coming from Singapore, with its heat and humidity, this weekend will have a very different feel to it, heading back to more normal conditions. My priority is to continue working well with the team as we have been making progress since I returned from Spa onwards. Of course in Russia, all the attention will be on my team-mate and there'll be plenty of support from the fans for Daniil. Then, after that, we come to Japan which is another important race for the team, as a home event for Honda."

Daniil Kvyat: "As you can imagine I am very happy to be racing here in Russia, where I always have plenty of support from the fans. It makes for a very cool atmosphere in Sochi and the track itself can usually provide some good racing with its long straights. I think it's going to be an interesting weekend for us. I plan to really enjoy my home race.

"The Sochi Autodrom is an interesting track and the images will be well known to anyone who watched the Winter Olympics here. I still remember the first race we had here back in 2014: I was also driving for Toro Rosso back then and I had a really good qualifying and started from fifth on the grid. Then a year later, driving for Red Bull Racing, I finished the race in fifth place, so I have some nice memories of this event.

"A few weeks ago, I was in St. Petersburg to promote the Grand Prix, which was a very enjoyable experience. I was surprised at how many people were there thanks to the efforts of Red Bull Russia. I think this year's race could be quite tough but, as always, I will be giving it my best shot for myself, the team and of course all the home fans.

"A few days ago in Singapore, I had a very difficult race which didn't go well for me. But I don't let things like that bother me and I'm planning to try and make up for it this weekend, so I hope we'll be able to celebrate a good result together!"