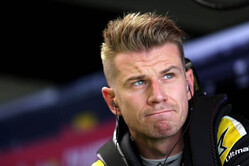 Nico Hulkenberg recovered well after a lap one incident in Singapore to collect two points. He heads to Russia with some momentum having scored at the last three races, as he looks to keep the points run going.

What do you like about the Russian Grand Prix?
Nico Hulkenberg: Russia is an interesting place and it's still a relatively new venue for Formula 1 but, in recent years, the Russian atmosphere has grown quite strong. In terms of a lap, it's quite long with a lot of corners. Putting together a complete lap can be difficult and you have to string it all together and carry all the momentum. The track has a good flow, it's quite high-speed with not many slow corners. Overtaking is quite difficult. There are some nice combinations, the chicane towards the end of the lap is quite awkward as it's off and on camber, but it's quite fun.

What's the verdict after the Singapore Grand Prix?
NH: We recovered well in Singapore after the lap one incident. That's part of the game at street circuits as anything can happen, but you have to be patient and we managed to take home some points. We were competitive in both qualifying and the race and certainly more points were possible had things panned out a little smoother. We move on to Russia immediately and we'll be aiming for more points.

Daniel Ricciardo left Singapore with a feeling of frustration after a stellar drive from the back of the grid put him in top ten contention. The Australian is now focused on Russia where he has an extra ounce of determination for a solid haul of points.

How much do you like the Russian Grand Prix?
Daniel Ricciardo: Sochi is quite a cool track as it's very flat and open; almost directly opposite to the close walls and bumps in Singapore. It's an enjoyable lap with a lot going on at the wheel. The surface is smooth with quite a lot of challenging corners to get right. The Russian Grand Prix has certainly grown on me since it was introduced to the calendar.

What's the feeling after the Singapore race?
DR: The whole weekend was a bit of a shame in the end, having initially looked so promising. The disqualification was painful to take as we know how important track position is in Singapore and how difficult overtaking can be. It is what it is and we gave it our best. I was having a lot of fun for the first-half of the race with some overtakes, but then it all came undone. It would have been a great result had we pulled it off.

How important is it for a strong outing in Russia?
DR: We have the opportunity to carry some energy into Russia and look to make amends and be back where we deserve to be. After the summer break we've looked very strong and turned the battle for fourth around. A good result in Sochi is possible, we just need to piece together a solid weekend like we have at the last few Grands Prix.