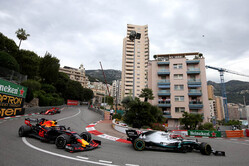 Though the current system of penalising drivers who exceed their component allowance by demoting them to the nether reaches of the grid is unpopular with both fans and the drivers themselves, the proposal by F1 bosses to introduce weight penalties (ballast) instead is not receiving the support they'd hoped for.

"I think we've seen in other categories that it doesn't work," says Christian Horner. "It screws your whole weekend, not just the qualifying.

"The only shame about what we have at the moment is that it potentially robs the fans on a Saturday of seeing drivers going for a qualifying position," he added. "If we look at Monza, Max taking part for a couple of laps in Q1, not wanting to progress past Q2.

"I think if we could find a more balanced penalty than just straight to the back of the grid we should consider it, so that you are still encouraging drivers on a Saturday to be going for a qualifying position."

"I'm not a big fan at all of the ballast - not ballast success, but ballast penalty," said Alfa Romeo's Fred Vasseur. "I think it would be even worse for the race.

"At least when you have the penalty you start from the back it could spice a little bit the race but if you have the ballast penalty it would be even worse."

However, at Renault, Cyril Abiteboul, in the opinion of Pitpass, has a far more sensible proposal.

"Our position has not changed for a while," he said. "We are suggesting a time penalty by position to grid penalty.

"I agree with Cyril, so you got one vote," added Zak Brown. "I think a time penalty is pretty clean to understand. It doesn't mix up the grid, you serve it at your pit stop. Strategy comes into play - when do you pit, tyres etc - so that I think would be the simplest, least disruption, the easiest to understand and would add some excitement to the race."

Indeed, a driver, like Verstappen for example, aware that he has to make up 5 or 10s seconds would be encouraged to push harder in order to make up the deficit. This would allow the starting grid to reflect the order in which drivers qualified, while encouraging drivers to still push in Q2 and Q3.

It would also avoid the feeling that ballast would give, that some drivers - due to the added weight they are carrying - are being out-paced by (usually) slower cars and their teammates.