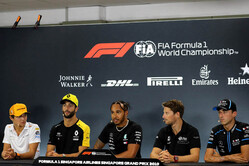 Romain, if we could start with you, please. Many congratulations, it's just been announced that you are staying with the Haas team in 2020. Please can you give us your reaction to this news?
Romain Grosjean: Yeah, good evening. It's great, obviously great news. I will be will be with team for a fifth consecutive season. We've built this story since day one and it feels like the story is not yet over, so very, very happy to carry on with the team. Obviously this year has been a challenge but also it's been a good year in terms of growing up for the team and understanding what went wrong and how can we move on in the future. Looking forward to many more races in, black and gold for now, but under the Haas colours.

You say this year has been a challenge. How confident can you be that 2020 is going to be better?
RG: You never really know but I guess that the team has worked really hard and has made some good understanding this year from the drivers' feedback and from what we have seen. It's a bit of a similar situation to 2017 to 2018 where in 2017 the car wasn't as fast as we wanted and then in 2018 we had a very competitive car. Yeah, I have got confidence that we will bounce back, to which level you never know, but hopefully to a good one where we can fight for some fun races.

Many congratulations Romain. Robert, while we're on the subject of 2020, is there anything you can tell us about your future?
Robert Kubica: Yes and not. First of all, we are looking forward to the next year and looking forward to different opportunities but yeah, in order to evaluate our opportunities I have taken the decision that I will not continue more with Williams [after] this year. I will stop at the end of this year with the team. Which is a decision that I took, which opens a bit the opportunities for me for the future in different scenarios and now I will evaluate what is possible.

Do you want to stay in Formula 1 next year?
RK: Well, I always say that I took a lot of energy, a lot of time for me to recover and come back to the sport and since I joined back Formula 1 I would like to stay. I said that this year it would be say a goal to remain in Formula 1. But yeah, of course my answer would be, yes, but not at any cost. And I think I have to first of all do what will bring me back a bit of joy in racing. Of course this season has been very tough from a performance point of view but it has also been very demanding, being back in Formula 1 after a long time is not easy - especially when you are in a difficult situation, as we are. But still nevertheless I have to thank the team for the opportunity and we will see what the future will bring.

Well, thank you and best of luck with that? Lando, it's been a slightly frustrating period for you since the summer break. How easy has it been to shrug it off, particularly the last-lap retirement at Spa?
Lando Norris: It's not been too bad to be honest. As much as I've been annoyed and disappointed... (laughs)... stop it!

Daniel Ricciardo: I gave him 10 seconds. I knew you'd start laughing within 10 seconds.

LN: I don't want to! OK, as much as it's been annoying and disappointing, especially at Spa - last lap and I was on for my best result - and at the moment for us, as a team, we haven't had the best few weekends in a row, and especially after Monza, Renault caught up quite a bit in the championship, so it's been tough for me because when you're on for such a good result - I know it's fifth and not a win and so on, but for us and for myself it's still a big achievement - I'm a little bit annoyed. At the end of the day we've still been working hard. We've shown at points what we can do, we've showed it in other areas, but at the end of the day, it happens. It wasn't in my control. It wasn't in my engineer's control. It's just something that happens in Formula 1, so I just have to move on.

And looking ahead to this weekend, it's your first experience of the heart and humidity of Singapore and what can we expect from McLaren this weekend?
LN: Personally, I've been here, maybe a bit too long, but I've been here since last Thursday. Not for any reason in particular apart from getting used to the place. Cycling the track a bit. Getting used to the temperature, the humidity and so on. Everyone says this is the toughest race of the year for the drivers...

LN: I know! Everyone says this is the toughest race for the drivers physically, for the concentration you have to have on the track, and then in combination with the heat and so on, so yeah, I've done everything I can training wise, but I'll find out on Sunday.

The car?
LN: I don't know. I want to be hopeful and say it's going to be better than Monza, because Monza I don't think was the best for us, even though Carlos qualified well, I don't think it was the easier track compared to some of the others, so I'm hoping that this weekend we can be a bit stronger but at the same time I think we all know it's going to be quite a difficult one.

OK, well good luck with it. Thank you Lando. Daniel, you scored your best result for Renault at Monza. Was that result the shot in the arm you needed?
DR: I don't like needles, so normally I don't like a shot in the arm. It was definitely good for us. I think it had been a while since we had a big result like that - obviously Canada was the standout in the first half of the year. I think Spa was a pretty positive weekend for us up until the start of the race. I think we were on for a decent result there, but then to back it up in Monza, and both cars to do it, was really good; definitely strong from the start of the weekend. Obviously it's nice as a driver to get the result, but definitely for the team to get that, I think they had been craving a strong result, from both cars as well, and to get us back in the points, or in that points battle we're in. Obviously McLaren were running away with it but we made some good ground. So yeah, that was good. I think I made an emphasis afterwards to kind of tip my hat to the engine guys, especially the guys working at Renault in Viry. To get a big result like that on power circuit, not many would have predicted that, especially in the last few years, so to come out there and do it in Monza I think was a big pat on the back for them.

And looking at this weekend: you've had good results in Singapore, with four podiums, so what about the car? What can expect from you here?
DR: I don't know. The last few races we seem to perform better on lower downforce circuits, but going back to Monaco that's the most similar circuit to probably here and we qualified quite well there so. I think we do have the potential to be good on this circuit as well. I don't think it comes as natural for us or our car at the moment. But I definitely think we can put it together, so we might have to work a little bit harder for it but I think the pace is ultimately there in the car, we just have to find it. But it's a fun one. As all the boys really said, it's physical, it's hot, bumpy but street circuits, they're a good time.

Thanks. Lewis, you're gunning for your fifth win here in Singapore and after the battles with Ferrari at Spa and Monza and Red Bull prior to the summer break, how tough are you expecting this race to be?
Lewis Hamilton: Well, this is one of the toughest races of the year, if not the toughest, physically and mentally and then we come here each year, it shifts between the Ferraris, the Red Bulls and us. Last year the Red Bulls... they've particularly been quick over the years and we anticipate that they they're going to be strong this weekend. And again, I have no idea whether Ferrari will be quick, as they have been in the last races, or not. We'll just focus on ourselves and try to make sure we extract the most we can. We've not really performed that well over the last couple of years but we've come out with not such bad results due to other circumstances so I hope that we fare well.

Any concerns about the performance of your car in the heat following the cooling issues you had in Austria earlier in the year?
LH: I'm sure that's definitely on the radar. It's not really the hottest that we've seen so far, so fingers crossed it stays something similar to this but of course if the rain comes or whatever, if it gets hotter through the weekend it could change.

(Frederic Ferret - L'Equipe) Question to all of the drivers. What are your thoughts on the new ways you are dealing with hard racing? Second question, is the haze in Singapore a concern for you as drivers?
LN: I think they've dealt with it fine. To be honest, I haven't seen everything what happened between Lewis and Charles in Monza but I think it's fine. Compared to some other categories, you get a lot more racing than we have had in Formula 1. Or, let's say, in the past few years. This year's maybe a little bit better. But when we get a chance to race, I think it's better - everyone says it - just let us race. We can have some battles and, if a bit of contact comes every now and then, I don't think it's the end of the world. I think that, sometimes, part of it... obviously you do have to look into it and if it's anyone's blatant fault or anything's done intentionally, then that is unfair. I think the chances of us just racing, having fun, I think that's part of Formula 1, so from my side, that's fine. The haze... I don't know. I think it's fine...

LN: I've been here the longest out of anyone, I think, so if anyone was starting to be ill, or not feeling good... I think I'll let everyone know.

Daniel?
DR: On the racing stuff, actually I think Lando covered it very well. There's a little bit of touching, and there's pure dirty driving, or dirty racing - but I think a little bit of... I mean I obviously saw the replays of Monza. It was certainly tight and, yeah, a bit on the edge with giving room...