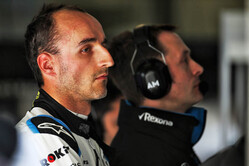 Following reports in the Polish media, speaking at today's FIA press conference, Robert Kubica confirmed that he is to leave Williams at the end of the season.

However, the Pole admitted that he hoped to remain in F1.

"It was my decision," he told reporters.

"I know there are some consequences which follow my decision," he added, referring to media claims that Polish sponsor Orlen is to also leave the Grove outfit, "but this is a completely different topic.

"It has been only my decision," he insisted.

When asked whether he would consider a role that mainly involved simulator work, he replied: "Regarding simulator I don't want to go too much into details, I will be evaluating different opportunities.

"I would like to thank Robert for his hard work and respect his decision to leave the team at the end of the 2019 season," said Claire Williams in a subsequent press release. "Robert has been an important member of the team in both his role as reserve & development driver, and subsequently as one of our race drivers in 2019.

"We thank him for his continued efforts throughout what has been a challenging couple of seasons and wish him well in his future endeavours."

The Pole retuned to F1 this season, nine years after the rally crash which almost claimed his life.

Despite his injuries the Pole was determined to return to F1, and participated in various motor sport disciplines in his efforts to prove his ability.

Finally given a seat with Williams, having failed to convince Renault, the Pole has been regularly out-performed by his rookie teammate, George Russell.

However, his insistence that he will be racing again next season, coupled with the fact that he clearly hasn’t written off F1, suggests the Pole believes he can still be competitive.