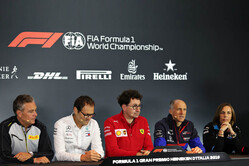 Q: Question to all of you to start with. There was confirmation this week that the Italian Grand Prix will remain on the Formula 1 calendar for at least another five years. How important is it to for the sport to retain races and tracks like this one?
Mattia Binotto: Obviously we are very happy with the announcement at first because the Italian Grand Prix - and we believe this obviously as Ferrari but for the sport and the fans - having one race in Italy is key. Fundamental. We've celebrated this season the 90th season of Scuderia Ferrari but as well the 90th year of the Italian Grand Prix - so it is something which is part of the F1 history and we cannot miss it.

Franz?
Franz Tost: I think it's very important and really good news that Monza stays in the calendar because, as we all know, Monza is an essential link to Formula 1, to the history of Formula 1 with highlights but also with tragedies. For me, Monza is one of the most important tracks regarding the history, like Silverstone - there should also be one race in Germany - like Monaco, Spa. These are the tracks where, in Europe we have to have races because the history matters to us.

Claire?
Claire Williams: I would totally agree with what everybody has said already. Monza is a historic race; the Italian Grand Prix should remain on Formula 1's calendar. As much as it's great to have all these new tracks we're going to in lots of far-flung places across the world, Formula 1 having races remaining in its heartland is absolutely critical to our sport. It's a wonderful track. The fans here are fantastic - as much as predominantly they're Ferrari fans, I know there are a few Williams fans in the crowd as well, and that's great. There's nothing better than racing in places where you have so many fans turn up to cheer you on.

Mario?
Mario Isola: I cannot add a lot more. Monza is our real home race because the company is half an hour from here, so on top of the reasons mentioned by them, I fully agree. It's feeling at home, it's great for the fans, great for everybody, so happy to have Monza in the calendar for a long time.

Feeling at home - stay at home as well?
MI: Yes, sleeping at home, not at a hotel. Fantastic.

Aldo?
Aldo Costa: I can give you the petrolhead answer. It has been my first circuit as a fan, where to see a Formula 1 race, and then, yeah, career has developed with Minardi, Ferrari, Mercedes, a lot of memories. It has been an incredible story around this circuit, and I'm very happy that it will be kept for the future.

Q: Staying with you, Aldo, news broke today that you're joining Dallara next year. Can you just tell us why you've made that change, and tell us about the new role as well?
AC: Yes. It has been, of course, a difficult decision. I have spent, until now, eight years in England at Mercedes and it has been really a fantastic experience: a fantastic experience with the people, with the team. In the team you should see which harmony is there and how great is working for the team. Unfortunately my family stayed in Italy and for us it was quite tough, and at the end, I decided to take an opportunity that will allow me to further develop as an engineer and, in the meantime, to stay closer to home. So, coming back to my land and try to develop the Dallara Group to the next step, and try to develop new talents - something that I love. And, I love as well, working on different cars and not only Formula 1. So, fantastic opportunity combined with a different lifestyle and yeah, was a perfect choice for me.

Q: Eight years at Mercedes, as you say, but more than 30 years in Formula One. How do you reflect on your career so far - your Formula 1 career?
AC: yeah, it has been amazing. I have done three big, long cycles. This is what I like. Minardi; Ferrari; Mercedes: building up a team; building up an organisation; building up processes; building up design capabilities. So, yeah, it has been a career, wonderful for me and a lot of nice memories in all the three environments. And now, yeah, I'm starting the fourth long cycle - I hope.

Q: Franz, you spoke last weekend about how you were going to manage Pierre Gasly on his return to Toro Rosso. So, how do you assess his performance at Spa?
FT: He showed in Spa a very, very good race. A very good performance. I think that Pierre is back underway and he will also come up with good results - hopefully here in Monza as well and I am quite positive. Unfortunately here he has to start from the back of the grid because we change the power unit on his car but nevertheless - and Daniil showed it last week in Spa - it's possible as well, scoring points and starting at the back of the grid. He gets more and more familiar with the car. The team, he knew already. There's nothing special. And he is making the progress which we expected.

Q: Monza hasn't been a happy hunting ground for Toro Rosso in the last few years - in the hybrid era. Pierre is at the back but what you do you think you can achieve this weekend with that car?
FT: It depends which weather it is. If it's wet, I think we've a good chance because Daniil was quite happy today with the car and the wet conditions. I hope that we can show this performance as well under dry conditions as it looks like tomorrow - Saturday - will be dry but Sunday could be wet. If we get the set-up together, especially from the aerodynamic side, I think that we are quite competitive because, with the Step 4 engine from Honda, we made a step forward, and therefore I don't think that we have any disadvantage.

Q: Claire, coming onto you, while we're talking about performance, we saw your team take a step forward in Hungary a couple of races ago. What can we expect from you this weekend on a very different type of circuit?
CW: I think probably similar levels of performance to that which you saw in Spa. These circuits are particularly penalising when you've got quite a lot of drag on car, which unfortunately we do at the moment. So, it's going to probably be another tough weekend for both George and Robert. I think, probably, long run pace in Spa was better than we expected it to be. The guys had a vaguely decent race. They were able to fight with somebody else rather than just themselves. But, again, Sunday's going to be difficult for us. Maybe depending on the weather, we might be able to capitalise, is there's a bit more of a lottery going on - but I think we're probably more looking forward to Singapore than racing on Sunday afternoon here.

Q: And where are you at in your understanding of this year's car? In terms of, do you understand the deficiencies enough to be able to implement the correct changes into next year's car?
CW: I think we're probably pretty - very - clear on where the deficiencies are. We need more downforce, we need less drag. And obviously the aerodynamics team are working really hard on that. As you all know, we bought a significant package to Germany. We're still trying to capture a lot of data to truly understand how much that performance did bring for us - and we continue to bring test items to each and every race to dial out some of the issues that we have across other issues that we're facing at the moment around some of the mechanical areas on the cars. So, we're doing all of that. We've got a very clear pathway moving forwards. A lot of that work will continue to ensure we improve this year's chassis but also so that we bring performance items this year that will have an impact on the FW43 - the 2020 car.

Q: Mario, coming to you. It's the Temple of Speed this weekend. The cars exceed 200mph on four occasions around the lap here at Monza. How do those speeds affect tyre performance?
MI: Yes, Monza is a circuit where you need a lot of traction, where you need to protect the rear tyres. There is not a lot of downforce on the cars because they need the speed, so there is an additional stress on the tyres, I believe. We have a good tyre choice, then a lot will be on weather, because the weather forecast is, for the moment, on a wet race, and maybe we will see a lap record tomorrow in qualifying. That should be dry - but I think it's not easy for the teams to understand the weather this weekend, so the stress on the tyres is quite high - but more on that is how to understand the condition of the circuit.

Q: Now, looking further ahead than this weekend, big week for you next week when you begin testing the 18-inch tyres with Renault at Paul Ricard. Can you just enlighten us a little bit more about what the programme is for that test?
MI: Yeah. We are ready. We start with a baseline, obviously. The test will be more on construction. That is what happens usually, when you have a new size, a new challenge. I have not a clear idea what to expect. We started already the F2 tests with 18-inches. That is going quite well, so hopefully we have the same result with Formula 1. It's obviously more... I don't want to call it a 'shakedown', because we are going to test for two days and we have a programme that is quite big. We want to test different solutions to have a better idea. We have these three sessions to understand and assess the baseline for next year and then, obviously, we will have a full year of development next year to finalise. The challenge is big, as I've said many times, and happy and excited to start very soon.