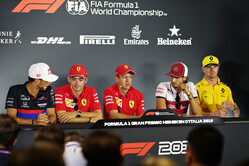 A question for you all to start with. Confirmation came through last night that the Italian Grand Prix will remain on the Formula 1 calendar for at least another five years. Can we get your reaction to that and can you tell us what this race and this track mean to you? Sebastian, can we start with you?
Sebastian Vettel: Very happy obviously. I don't know if I'll be here for five years. I think it belongs in the calendar, so I'm very happy that it was confirmed. It's not really necessary to mention the importance of the Italian Grand Prix for Ferrari. It's our biggest race of the season. It belongs here. Obviously for me, a lot of memories. The win in 2008, my first win, for sure was very special. The ones after that people weren't so happy, but I guess nowadays they would be happy again.

Charles?
Charles Leclerc: Obviously very happy. There's nowhere else you can see as many passionate people as there are here. As Seb said, driving for Ferrari it feels very, very special and I definitely hope that I will still be here in five years.

Pierre?
Pierre Gasly: Same comment. The passion you see in Monza is really special. The whole atmosphere during the weekend is really amazing. Plus, the track is really cool and usually good racing, so it's fantastic news.

Nico?
Nico Hulkenberg: Yeah, definitely good news. It's always a good weekend and to secure another iconic European in the long term is very positive.

And Antonio?
Antonio Giovinazzi: Of course, really important. For me it's the home grand prix. My first time here in F1, so really great to have the news yesterday that we'll be here for at least another five years. Good for Italy, good for Ferrari, good for Italian drivers, so yeah, really grateful.

Antonio, staying with you. You say this is your first time here in F1. You won the GP2 feature race back in 2016, which was a big moment in your career then. Can you compare your emotions now coming into this race, your first Italian Grand Prix?
AG: Yeah, it's incredible, I would say. This was one of the grands prix I always watched when I was young, of course supporting Ferrari. Back in 2016 it was one of the best races of that season and of my career as well - coming from last and I won the race in front of all the tifosi, my friends, my family, so it was a really great memory. Now I am here in F1, so I'm looking forward, I have a lot of people coming here to support me. I hope to have a good result and just enjoy my first weekend here in Italy.

Now, you're the first Italian to race in the Italian Grand Prix since 2011. Why do you think it has taken so long for another Italian, you, to come through?
AG: I think in go-kart already when you are young and you start to dream of becoming a Formula 1 driver, I think karting now has become too expensive, so there is not much support in Italy to give to the young drivers. I think we have a lot of good Italian drivers now, from watching now like some races in go-kart but of course it is really difficult to do already the next step from karting to Formula 4. I hope this can change. From my side, I did a lot of sacrifices. I was lucky to find [Ricardo] Gelael to support me until here, but it is not easy. This is one of my points that Italian drivers are not any longer in F1, but I think it's difficult also for the other countries. But I'm really that Italy is back after a long eight years.

Thanks and good luck this weekend. Pierre, it's been a very eventful month for you. Can you describe how you were able to re-set head of the race at Spa last week and get that great result?
PG: For sure it's quite a challenging time for me at the moment that I'm facing. Coming into Spa they were really busy and intense days - to get on top of all the new things with Toro Rosso, being back with the team, also a new crew around my car. It was just really intense ahead of the weekend. I tried to extract the best and deliver the best performance straight away and that's what we tried to do. Yeah, I think just now I know that I have eight more races coming with Toro Rosso. I'm just trying to focus on myself, improve myself and to deliver the best performance I can for the team. For sure, what happened in Spa, it was really tough before the race on Sunday and it was difficult to keep the focus, especially in this kind of moment, it's really tricky for everyone. It was tough mentally but it was important to deliver the best race I could for the team and for Anthoine and I think we can be really happy with the two points we scored for our first race back together.

OK, good luck with that and with this weekend. Nico, on the face of last weekend's announcement regarding Esteban Ocon moving to Renault next year leaves your future uncertain. The 2020 grid still seems quite fluid, however, so are your plans taking shape?
NH: Not concrete yet, but there are definitely talks going on. But I think it will still be a while. Like I said last week, the situation is what it is now, but it needs to be the right deal, a good sporting perspective, and I'm in no urgency or hurry to sign anything, just to have signed anything. I think there are options out there but nothing to talk about right now.

And looking ahead to this weekend, what can we expect from you and Renault, because it was a difficult one at Spa for you guys?
NH: Yeah, it was a tricky weekend but quite rewarding in the end, getting four points back on the board. That was quite positive and we're trying to take that momentum here. It's obviously a new weekend, so a new approach and we'll see how the car performs here. But there's no reason to be skeptical about it. We'll just be pushing and working hard and for me, in terms of my mindset, I just want to get the maximum out of it every weekend, take it weekend by weekend, enjoy it, and maximum attack.

Thanks for that, Nico. I want to come to both Ferrari drivers now. We saw a fantastic celebration at the Duomo in Milan last night. How was it? Sebastian, tell us what went on?
SV: Very busy, packed! I think it's very difficult to put into words. It's a very iconic on it's own, it it's empty, that place, but with the red sea, or flooded with people dressed in red, it was definitely prettier than I remembered it. Probably I should never go back, because it's never going to be as pretty. I think it was special for us as current drivers, but there were also a lot of recent drivers, older drivers from the past of the Scuderia, so I think that was a nice thing to get together and have a chat also later on with them. Obviously some of them are very around, but others you don't see so often, so enjoyed that. A lot of old important cars, important pieces of the team's history, so for me it was a great day.

Charles?
CL: Yeah, it was unbelievable. I think Seb said nearly everything. For me it was also the first time I arrived here in Italy for the Italian Grand Prix as a Ferrari driver. Obviously I knew it was going to be special, but as a first day I could not expect any more. So many people, so much passion, it was just incredible and very, very impressive to see so many people coming together on a Wednesday for us and for Ferrari of course. It was crazy.

Staying with you, you're now Ferrari's youngest ever winner in Formula 1. You said on Sunday you were struggling to process what had just happened, so how do you reflect on that achievement now, a week later?
CL: Obviously it was a very tough weekend for different reasons - obviously with what happened on Saturday, but also because we knew with the performance we had in the race it was going to be difficult because Mercedes were very, very strong with their race pace so it was a tough weekend. But in the end we managed to put everything together. I think there was great teamwork between myself and especially Seb, who did the job of keeping Lewis behind for a few a laps that have been very helpful for me towards the end of the race. Looking back obviously I am very happy that this first win is done. It's always difficult to do this first step but once you do it, it takes quite a bit of weight off your shoulders and of that I'm very proud. Not much time to actually think about it because we are already four days later here in Italy and we need to focus fully on the job that we have to do here.

Sebastian, Charles made reference to the race pace of Mercedes at Spa, how do you think it's going to play out here?
SV: I can't predict but I think it should be... It's a similar track, very different but in terms of the way the cars are set up similar to last weekend. I hope we can be as competitive as we were there. In relative terms it's difficult to say. For sure we've seen the trend that in qualifying we have a bit of an edge on these types of tracks, whereas in the race everything moves very close together. As Charles said, they were very quick last weekend, so I expect the main challenge to be looking after the tyres, finding the right set-up, the right balance in the car, to feel comfortable to extract the maximum. I can't give you any predictions but I guess it will be very tight. I hope we have something to say. Obviously Mercedes has been in a position to win nearly every race this season but for us it hasn't been like that, so the more chances we get the better it is for us.