McLaren calls for transparency from Renault 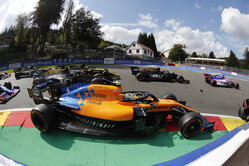 McLaren bookended yesterday's Belgian Grand Prix with a double retirement, Carlos Sainz losing power after just one lap, and Lando Norris grinding to a halt on the pit straight just before the final lap, the Briton at that stage running a comfortable fifth.

While the Woking outfit remains fourth in the team standings, the double DNF prevented it consolidating its position.

And while some eye the fact that the customer team is on almost double the points of the works Renault outfit, team boos Andreas Seidl has called for transparency from the French manufacturer.

"It's disappointing for us to have two DNFs, with one driver not even being able to make the race start," he told reporters. "At the same time the situation is on Renault's side as well.

"Renault is making a huge effort in order to bring power updates throughout the season so that's encouraging to see," he continued. "But it is disappointing to have these penalties and DNFs in the races.

"It is important that we have a transparent and open relationship, and that we analyse the issues and try to solve them together."

The German also admitted to being mystified by Norris' strong pace in the race, when both drivers had struggled in qualifying and practice.

"It will be interesting to see the analysis, what the reason was that we could suddenly be the fourth-fastest car, because we didn't expect that with the strategy we had on Friday and Saturday.

"We made a step with Lando in qualifying so we were only a tenth away from qualifying three, but I expected a different race," he admitted.