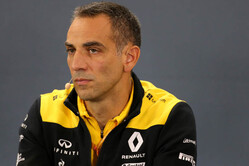 Q: Cyril, big change on the driver front for you for 2020 with Esteban Ocon joining the team. First, can you tell us why you made that call?
Cyril Abiteboul: First, I'd like to say it's been a difficult call to make. Obviously Nico's contract coming to an end at the end of this season, a decision had to be made as to whether we wanted to stay put with our driver line-up, or include a bit of a change. It's been difficult because we all love Nico in the team. He's been instrumental to the progress that we've made. We have struggled this season but last year he's been instrumental in securing P4 in the Championship. He had a good seventh place in the Drivers' Championship, which is clearly the best that we can targets but, you know, frankly, when you make a decision like that, you don't just look at pure pace, you also need to look at the collective dynamic. And there is a dynamic we need to restart, reset into the team. And probably, we need to project ourselves into the medium to long-term future. So not just 2020 but also 2021, and what's happening to his team-mate and so on and so forth. So that's all of that but in particular the collective dynamic and what Esteban can probably bring to the team. Probably starving for racing, being super-happy to come back into racing, by nature, by construction because also he's been out of a seat for a year. It's all of these elements that we factored into the equation. Plus, also it's important to say that we have, not a certainty because you can't be certain of anything, but very high chances that Nico will be able to continue his racing career. So, just like it counted for us with Carlos last year, it's also counted for us this year with Nico.

Q: And will Ocon retain any ties with Mercedes from 2020?
CA: No. He's a Renault driver, that's very clear. Mercedes will have absolutely no right on him for the duration of his contract. So, small difference is that his management company happens to be a racing team, and that's Mercedes - but it's a slightly different set-up from the set-up we had with Carlos last year, where that was on loan and not under contract with Red Bull - but he will be a fully-fledged Renault driver.

Q: Guenther, Cyril mentioned there that he's hopeful that Nico Hülkenberg will stay in Formula One next year. Is he a driver that you would be interested in hiring?
Guenther Steiner: I mean sure. As Cyril said, and I think he's right, sometimes you have to look at the whole dynamic of a team. It's not all about the speed of a driver and if people like Nico's on the market, for sure we need to look at that. We haven't taken a decision as you all know. This is a thing you need to do as a team. To look what is around, how you can bring the team forward. I mean, we are not at our best this year, we were better last year, so we need to see where we can make improvements. If good people are on the market - in every area of the team, not only drivers, we look around and see if we can better the team and with that, can we better the performance of the team?

Q: You say you haven't taken a decision yet - when can we expect a decision from you?
GS: I hope, honestly, in two to three weeks - because it's good for everybody; it's good for the team; it's good for the drivers. It Romain stays, it's good for him to know so he doesn't have to worry. If Nico comes, it's also good to give people a chance to make other decisions or to look around, so our aim is to decide in the next weeks.

Q: Franz, Alex Albon has switched to Red Bull for the remainder of the season. What is your reaction to that change? Do you feel he's ready for it?
Franz Tost: The future will show. Don't know yet. Alex did 12 really good races with us, he's got 16 points and I must say, from the very first test onwards, I was surprised by his performance. If you remember right, I said after the first test that maybe he could become the surprise of the year. He is on a good way and I think that Red Bull will provide him with a fantastic car and therefore I expect good results from his side.

Q: And it's difficult for Pierre Gasly who's coming back to Toro Rosso. You've been there before with Daniil Kvyat, who took a similar route. How long will it be, do you think, until Pierre gets over the disappointment of returning to Toro Rosso?
FT: I don't hope it's a disappointment to return to Toro Rosso, he is welcome with us. It was only a short time he was not with us. He came to my office, I said to him: "ah, it looks like you were here yesterday." No, he is really welcome and we have a really good relationship together, also between the engineers and if we provide him with a good car, Pierre will be back soon, I am convinced about this.

Q: He spoke yesterday about being disappointed. Do you think there will be any problems with his motivation?
FT: No, I don't hope so. A Formula 1 driver must always be motivated and must always push the car to the limit and he knows that's his chance, and therefore the motivation will be on a very high level.

Q: Otmar, we're talking drivers, Checo said yesterday that he hopes to make an announcement about his future soon. Is there anything that you can say on the matter?
Otmar Szafnauer: Yeah, soon might be today!

Q: Well, how about now...?
OS: Well, I think we have a formal process of announcing, and yeah, he's right, we will announce soon.

Q: Can you describe the role that Checo has played in the team and how integral he is to the team going forwards?
OS: I think both Cyril and Guenther mentioned it. There's more than just speed and what you do on Sunday. It's also developing the car and knowing the team, being able to compare your previous developments to the developments that you're bringing and, because of Checo's history with the team, of six years, he brings all that to the table. Lance, having great potential and a great talent, doesn't have that history with the team, so you need a good mix. I think we've got that in Sergio and Lance.

Q: And this race marks the anniversary of Laurence Stroll's takeover of the team. Can you compare where it is now, compared to before the takeover?
OS: There are many things that are different. The one significant thing is that we don't suffer with the financial instability that we used to have, at all. That means we can plan our developments on the car, we can plan when we bring upgrades and they actually happen. We can plan our salary payments, which is helpful for everybody in the team. Apart from that, we have plans going into the future. There's a new factory coming; we should get planning permission for that in October, probably start, have ground-breaking in the first quarter of next year. The plan is to actually move into the new factory in the break of 2021. So, although that won't come to fruition for another 18 months, or so, those plans are happening today. We've added about 40 employees: we were at 405 a year ago; we're at 445. And, like Guenther mentioned, if there are good people on the market, we're interested for good people. We're adding, we're growing and we want to be more competitive. So, those are our plans going forwards - but it takes time. It doesn't happen overnight.

Q: Tanabe-san, you're running your spec-4 power unit here at Spa this weekend. What advantages is it bringing?
Toyoharu Tanabe: We bring performance improvement with the spec-4 PU. The purpose of the spec-4 is a performance gain. Because as always, as I've mentioned, we're still catching up pace to make the gap between the top runners and then our teams. Honda should improve PU performance.

Q: Only Daniil Kvyat and Alex Albon are using it this weekend. What's the reason for that?
TT: We discussed with our teams about the PU usage and then we considered the current position, and then usage for the rest of the season. So, then we decided this strategic application.

Q: (Dieter Rencken - Racing Lines/Racefans.net) A question to the four team principals. Next year's calendar... according to the draft calendar announced yesterday will have 22 races, which you all had to agree to. Did any of you attach any specific conditions to agreeing to 22 races? And Cyril, more particularly, could you comment on suggestions that you requested an increase in the number of power unit components if the calendar went up top 22 races, please?
CA: I can confirm that we did. We asked for the principle that is already agreed for 2021 to apply for 2020. The draft regulations, which are just draft regulations for 2021, there is a concept that if you go above 21 races there is extra component allocation. So that's simply what we asked on the simple basis that it's very late to change the duty cycle of any component for next year. There was a bit of a discussion, as always in Formula One, but eventually we reached a compromise in Budapest that everyone managed to stick to, for once in Formula One, and eventually it was good to confirm the 22 races. We are happy to have specifically the same number of MGU-Ks as internal combustion engines. That's going to make the lives of the technicians, the mechanics in the garage, an awful lot of simpler. Sometimes we don't really think about these type of things but they do make a difference, in addition to the prospect of penalty. That was the condition that from the outset we mentioned. Otherwise we are very supportive of an extension of the calendar.

FT: As long as we get more money, if you have more races, I'm fine with it. On the technical side, from the power unit, has just been explained by Cyril, there's nothing to add.

GS: We kept a low profile and didn't ask for anything.

FT: Also not for money?

OS: I think we also agreed to shorten the amount of test days we have because we're increasing the calendar, which kind of makes sense and goes to wellbeing of the mechanics and all those that travel. One of the conditions we all agreed to, if I remember right, was a shortened winter test.