Ocon was on Haas shortlist 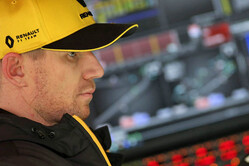 Other than a dramatic drop in performance on race days, Haas' cause this year hasn't been helped by the antics of its two drivers, Romain Grosjean and Kevin Magnussen.

Even before the 2020 driver merry-go-round got kickstarted by Mercedes it was clear that Haas was going to make changes for next yrear, and with Magnussen having a valid contract it appeared that teammate Grosjean was in the Last Chance Saloon.

However, speaking before this morning's news that Esteban Ocon is heading to Renault next year, team boss, Guenther Steiner admitted that the Frenchman was one of three drivers being considered to partner Magnussen, along with current incumbent Grosjean and Nico Hulkenberg.

"Our team always have drivers with experience, so for sure there is interest, there is interest for Ocon," the Italian told reporters. Asked if Hulkenberg was an option, he added: "I would say so. There are not many drivers here.

"I always said that they are the two," he continued, "and there is interest for Romain as well, so we just need to decide who we go with.

"They are the three with experience, otherwise I couldn't see anyone else who has got experience who is on the market," he admitted.

"I will spend some time with Gene this and next week," he said, "that was always our time, Spa-Monza, when we spend quite a bit of time together and then the team decides what to do."

With Ocon now bound for Renault, the choice appears to be a straight choice between Grosjean and Hulkenberg.