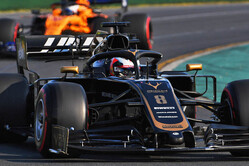 In a move described by team boss, Guenther Steiner as "drastic", from Silverstone, as Haas sought to understand its dramatic loss of performance on race days, Kevin Magnussen ran the latest range of upgrades on his car while teammate Romain Grosjean ran a car with original Melbourne-spec.

"Sometimes only drastic decisions work, in my opinion," said Steiner. "At some stage, if you continue to discuss, back and forward the same thing over and over again, that means you don't know what you're doing, in my opinion. So you need to prove it.

"It's drastic, and its very unusual, but sometimes you have to look outside of the box to know what to do to get an understanding, our aim is now to just understand what we have to do the second half of the season, nothing else. That is our task."

The summer break out of the way, the American team has opted to end the experiment and from this weekend both drivers will run with the same latest spec package.

"For Spa we will go with the upgraded car, which we ran at Hockenheim," said Steiner, referring to Magnussen's car. "We've learned quite a bit out of it and tried to improve the car by changing some of the components.

"Both cars will be the same spec," he added, "and hopefully we can still learn more about it."

Asked if there are further updates in the pipeline, the Italian admitted: "The focus has already switched, partly, to the 2020 car.

"We need to see what we can come up with in the wind tunnel, with the small developments we do there for the 2019 car, and if we bring any upgrade kits. We don't know yet."

Currently ninth in the standings, Steiner doesn't appear to hold out much hope of challenging for best of the rest in the remaining races.

"Everything is possible," he said, "but it is difficult as our car doesn't perform well in races, and that's where you score the points.

"Nevertheless, we will be trying hard to pick up whatever we can. Hopefully, we can get a few more results, and then we'll see how we end up in the standings."