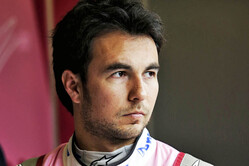 Sergio Perez has hit out at Daniel Ricciardo following the incident late in Q1 which saw both drivers miss the cut.

In the final moments of Q1, as drivers were about to begin their final flying lap, as was the case in Germany last week, there was a queue of cars heading into the final corner.

Daniel Ricciardo, who was behind Romain Grosjean, who was in turn behind Sergio Perez, who had slowed to create a gap to the next car ahead (Lando Norris), sped up in a bid to pass the pair, seeing this, Perez also sped up in a bid to prevent the move. In the end, both men failed to make it into Q2.

"We were stuck with traffic so everyone is trying to open a gap," said the Mexican. "You see the car ahead and everyone is just opening gaps.

"But I think what Daniel tried there was just very disrespectful," he added. "He screwed up his lap and my lap and I end up starting my lap to close to Norris, and I think Daniel was also very close to me, so it was just a very bad day for us.

"I had to go and that meant I couldn't let him by because I had Grosjean behind and the lap is about to start. That was very bad move from his side."

"I thought there was a gentleman's agreement, I think that agreement is completely gone," added Grosjean. "It's always going to be a mess before the last corner.

"It's down to the car behind you not to attack anyone, to back off, at the last corner," he continued. "It's not so nice from the guy behind, especially when there's time left at the end of the session to go round, we're all struggling with tyres and know those tyres are very sensitive to temperature. We're all in line so ask your team to let you go earlier if you don't want to be in a traffic jam."

"I wasn't trying to be a p***k," he added, "but obviously I'm trying to get my lap together because at that stage I knew I was probably going to be out of Q1... so desperate times..."

Asked about the gentlemen's agreement, he said: "There is etiquette if it's within reason but everyone was crawling and it's like, at some point you just do what's best for you.

"If everyone is spread out in their gap you normally have the etiquette, there's no need to screw anyone because you're in space. But kind of all bunched up, as soon as one guy goes, it's like 'if he's going, I'm going'.

"You don't intentionally screw anyone but at the end of the day it's each man for himself.

"I don't blame Perez or anyone else. In hindsight yes I could have sat back, because then I think it was only Nico behind me, in my head I thought if I go this low my tyres are going to be ice cold.

"It's a tricky one, but you've got to make quick decisions and it's not... at that point all you want to focus on is putting the perfect lap together, not 'who do I need to pass at the last corner'."