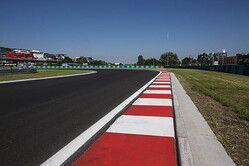 A number of minor changes have been made at the Hungaroring ahead of this year's Hungarian Grand Prix.

A domed kerb section 50mm high has been installed 1.5m from the track edge behind the kerb on the exit of Turn 5, while new debris fences have been installed on the right between Turns 3-4 and Turn 7. Also, the guardrail has been realigned behind the gravel traps in Turn 4 and Turn 11.

There are two consecutive DRS zones, which share a detection point 5m before Turn 14, with the activation points 40m after Turn 14 and 6m after Turn 1.

For the seventh time this year, Pirelli brings the C4, C3 and C2 compounds, having previously used this combination in Australia, China, Azerbaijan, France, Austria and last week in Germany.

The vast majority of F1 drivers started their careers in karting, and the tight and twisty Hungaroring, with the lowest average speed of any permanent circuit, is a reminder of those days.

However, this doesn't mean that the tyres get an easy time, as all those corners provide no rest for the compounds, for the Hungaroring is all about corners, most of them slow, which arrive in quick succession and which means that the tyres are constantly working, with no chance to cool down.

Average temperatures tend to be among the highest of the season. This not only increases thermal degradation, but makes life harder for the drivers, because the low average speeds (as well as the geographic location of the Hungaroring, inside a bowl) means that there is little airflow through the car.

Tyre wear and degradation is quite low. This year's tyre nomination is broadly the equivalent of last year, when the medium, soft, and ultrasoft compounds were chosen. The C2 tyre (hard in Hungary) is in fact a bit softer than the 2018 medium, and it's often used even when nominated as the hardest choice. In nine of the 11 grands prix held so far, all three nominated compounds have been raced.

The teams use high downforce settings to help negotiate the succession of corners, but mechanical grip from the tyres is equally important.

Those who are looking to bet on the last Formula One race before the summer break will not be surprised to see that once again Lewis Hamilton is favourite at Evens, while Germany winner, Max Verstappen is second favourite (9/4), ahead of Bottas (11/2), Vettel and Charles Leclerc (both 8/1).

Last year's winning strategy was a one-stopper, with Lewis Hamilton switching from ultrasofts to softs on lap 25 (of 70) and not using the hardest compound at all. Ferrari's Sebastian Vettel was second with an alternative one-stopper, from softs to ultrasofts, while his team mate Kimi Raikkonen was third with a two-stopper: three different strategies in the top three.

The race lap record still dates back to 2004 with Michael Schumacher. Could we see it beaten this weekend?

"Hungary is a very challenging race to end the first part of the season with," admits Pirelli's Mario Isola, "both physically and strategically.

"Overtaking is tricky with a narrow racing line - there is a risk of sliding if you get off it - so track position is key, and the strategy needs to ensure this.

"The Hungaroring is the sort of place that can cause a surprise though with the right strategy and a car that handles well, even if it's not the fastest, as we have seen a few times in the past. Last year, with the same tyre nomination as this year, we saw quite a few different race strategies following a rain-affected qualifying: hopefully we will have the same sort of tactical variety again this weekend."

In terms of the engine, the Hungaroring is not considered a power sensitive track since the lap is taken at just 55% full throttle. The average speed is just over 120 mph (195 kph) during qualifying, with each corner taken from second to fourth gear.

The turbo is highly solicited in Hungary. The driver is constantly on and off the power and having a turbo that can kick in instantly with accurate power will greatly reduce lap time by improving driveability. Sector two is critical for turbo response since the corners are mid to low speed, with rapid braking events. Delivering power when needed is important to overall lap time reduction.

The heavy braking zones will provide the MGU-K with the opportunity to recover energy. The main energy recovery points for the MGU-K will be the first corner, where the cars will brake from almost 192 mph (310 kph) to under 55 mph (90kph), and almost the entirety of sector two. Turns six and seven (the chicane) in particular feature another heavy braking zone that gives further opportunity to recover energy.

The MGU-H is really put through its paces in Hungary, possibly more so than at any other circuit so far this year. This is due to the small bursts of power between the corners which are very intense.

Ambient temperatures are expected to be hot, with the mercury well over the 30 C mark. Advanced cooling and heat dissipation strategies are to prevent overheating.

This year's is the 34th world championship Hungarian Grand Prix. The event made its debut in 1986 and has had a permanent presence on the F1 calendar ever since.

McLaren are the most successful team in Hungary with 11 victories. McLaren's first arrived in 1988 courtesy of Ayrton Senna and its most recent was Hamilton's 2012 win. Williams and Ferrari are in joint second place with seven wins each.

Kimi Raikkonen holds the record for most podium finishes at the Hungarian Grand Prix. The Finn has finished in the top three year a remarkable nine times from 16 attempts for a strike rate of 56.25%. Raikkonen's first podium here was secured in 2003, with second place for McLaren, and his most recent was with third place for Ferrari last year.

Raikkonen also has more fastest laps in Hungary than any other current driver. The Finn has four. The first came with McLaren in 2005 and since then has posted three more with Ferrari, in 2007, '08 and 2016.

Four drivers have claimed a maiden F1 win at the Hungaroring. Damon Hill took his first victory in 1993, with Williams, Fernando Alonso scored his first win in 2003, with Renault, and Jenson Button scored his maiden victory here in 2006 with Honda. The most recent first-time winner was Heikki Kovalainen. The Finn, driving for McLaren, stood on the top step for the first and only time here in 2008.

Williams' Robert Kubica made his F1 debut here 13 years ago. The Polish driver was drafted into the BMW line-up in place of Jacques Villeneuve. Kubica finished the race in the points, in seventh place, but he was later disqualified as his car was found to be underweight. Robert also marked his 50th grand prix start at the Hungaroring in 2009. This weekend's race will be his 88th start.