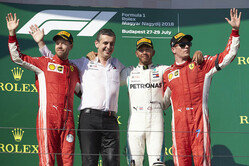 The vast majority of drivers started their careers in karting, and the tight and twisty Hungaroring near Budapest, with the lowest average speed of any permanent circuit, is a reminder of those days. But this doesn't necessarily mean that the tyres get an easy time, as all those corners provide no rest for the compounds. Consequently, Pirelli has nominated the C2 as the hard, C3 as the medium, and C4 as the soft in Hungary: the three compounds in the middle of the range.

The Hungaroring is all about corners, most of them slow, which all arrive in quick succession. This means that the tyres are constantly working, with no chance to cool down.

Average temperatures tend to be among the highest of the season. This not only increases thermal degradation, but makes life harder for the drivers, because the low average speeds (as well as the geographic location of the Hungaroring, inside a bowl) means that there is little airflow through the car.

Tyre wear and degradation is quite low. This year's tyre nomination is broadly the equivalent of last year, when the 2018 medium, soft, and ultrasoft compounds were chosen. The C2 tyre (hard in Hungary) is in fact a bit softer than the 2018 medium, and it's often used even when nominated as the hardest choice. In nine of the 11 grands prix held so far, all three nominated compounds have been raced.

Teams use high downforce settings to help negotiate the succession of corners, but mechanical grip from the tyres is equally important at the twisty Hungaroring.

Last year's winning strategy was a one-stopper, with Mercedes driver Lewis Hamilton going from ultrasoft to soft on lap 25 (of 70) and not using the hardest compound at all. Ferrari's Sebastian Vettel was second with an alternative one-stopper, from soft to ultrasoft, while his team mate Kimi Raikkonen was third with a two-stopper: three different strategies in the top three.

The race lap record still dates back to 2004 with Michael Schumacher. Could we see it beaten this weekend?

Mario Isola: "Hungary marks the final grand prix before the traditional summer break, and it's a very challenging race to end the first part of the season with: both physically and strategically. Overtaking is tricky with a narrow racing line - there is a risk of sliding if you get off it - so track position is key, and the strategy needs to ensure this. The Hungaroring is the sort of place that can cause a surprise though with the right strategy and a car that handles well, even if it's not the fastest, as we have seen a few times in the past. Last year, with the same tyre nomination as this year, we saw quite a few different race strategies following a rain-affected qualifying: hopefully we will have the same sort of tactical variety again this weekend."