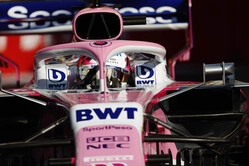 Lance: "Hockenheim is a fun place to go racing. I've been there many times in my junior career - especially when I was racing in Formula 3 - so I know the track really well. I just like the flow of the lap and it's a layout that creates close, side-by-side racing.

"These traditional European circuits are some of my favourites. It's a bit like Silverstone with big grandstands full of fans - it sometimes feels like a football stadium when you're in the final few corners of the lap. I really enjoy the atmosphere it creates.

"We've had a tough few races recently and our share of bad luck, but the mood in the team is still upbeat. There's new stuff coming to the car this weekend so there's going to be a lot of learning during the practice sessions. This team is very good at developing a car across a season and I'm optimistic we can make some progress this weekend."

Sergio: "We usually see good racing at Hockenheim. There are a few places where you can overtake - such as the hairpin - and I enjoy driving there. It's probably one of the best circuits for overtaking and the newest parts of the lap are really wide. You sometimes see cars going three or four wide on the approach to turn six and with such a big run-off area it's often worth taking a risk to overtake.

"Racing in Germany brings back the memories of when I used to live there. I was very young - having just moved from Mexico - and it was my first experience of living abroad and racing single-seaters. Those days were really good fun and I was living not too far away from Hockenheim. I still have friends in the area and I remember how much I enjoyed the German food.

"I hope Germany will be a turning point in our season. I've been unlucky lately, especially in Silverstone last week where we deserved to get a decent result. I believe we can make some good steps with the car before the summer break and hopefully our luck will change too. I believe in the work we are doing and I know it's just a matter of time until we get back to where we belong - scoring points."

Otmar Szafnauer: "At the half-way point of the season we certainly believe there is more potential to come from the RP19. With an incredibly close middle of the grid, there will be some weekends that play more to our strengths and it's important that we capitalise on those. Silverstone was a missed opportunity to score points and a number of factors counted against us, combined with some bad luck too.

"This weekend sees the arrival of some aero development items as we continue our push to bring performance to the track. We will use Friday for testing to hopefully unlock more speed from the car."