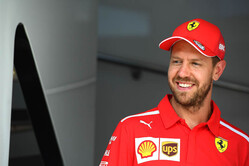 Sunday's race will be the 64th German Grand Prix to count towards the Formula 1 World Championship. It has been held at just three tracks, AVUS, Nurburgring and Hockenheimring, although significant changes to the last two means one could claim it's been held on five different tracks. Scuderia Ferrari has 21 German wins to its name.

The German GP first appeared on the calendar in 1951, held on the 22.8 kilometres of the Green Hell as the Nurburgring was known, reputed to be a very difficult track fit only for champions. Scuderia Ferrari was the first name engraved on the winner's trophy courtesy of Alberto Ascari. The Italian repeated himself the following year and the team had a hat trick when, in 1953, Giuseppe Farina was first across the line in a Ferrari 500. The Scuderia won again in 1956 with Juan Manuel Fangio. The Maranello marque was also victorious at the only race held at AVUS, in Berlin. The track consisted of two straights with a corner at each end, seriously banked to no less than 43.6 degrees, which led to very high tyre wear. So the race was run in two legs, with Tony Brooks and his 246 winning both of them.

Four years on, in 1963, John Surtees won in a 156 F1 and more importantly, as it was key to him taking the title at the end of the season, he did the same the following year in the 158 F1, gaining the nickname the Ringmeister. Ferrari won at the Nurburgring again in 1972, thanks to Jacky Ickx and in 1974 with the Swiss Clay Regazzoni. However, the events of 1st August 1976 at the ‘Ring are recalled for a very different reason, namely Niki Lauda's terrible accident, from which for a while it seemed he would not recover. But Niki was a fighter and a year later, he won this race at its new venue, the Hockenheim circuit. Back then, the track was over six kilometres long and featured two very long straights that cut through the Black Forest and then led into the technical Motodrom section, a series of tricky turns, especially given that the cars ran in very low aero downforce configuration to be as fast as possible down those straights.

In 1982, Patrick Tambay won in a 126 C2, but celebrations were muted. During Saturday practice, his team-mate Didier Pironi, who was in the title race, had a terrible accident that ended his racing career. The following year, Rene Arnoux won in a 126 C3. In 1985, the race returned to the Nurburgring, which had been turned into a very modern race track, although it lacked the mystique of its former incarnation. Michele Alboreto won for Ferrari to move into the lead of the championship in his 156-85. Nine years would pass before a Prancing Horse took the spoils of victory and that was courtesy of Gerhard Berger who, at the wheel of the 412 T1, put an end to a run of 59 races without a win.

Five years later, Eddie Irvine won with a bit of help from team-mate Mika Salo, who was standing in for the injured Michael Schumacher. In 2000, Rubens Barrichello might also be considered lucky to have won, when the Safety Car came out because of a one-man track invasion, but he also showed great skill, staying out on slicks when half the track was drenched in a downpour. Schumacher won first time out at the new Hockenheim, which had been completely remodelled, losing the long straights through the forests, with the long Parabolika now linking the first and last parts of the old layout. The historic Motodrom remained, but it is less challenging now that the track is medium in terms of the downforce required. The German champion also won in 2004 and 2006, while the last two Scuderia-branded wins came courtesy of Fernando Alonso who starred in 2010 and 2012.

Sebastian Vettel: "We have got to make up for last year, especially myself and I look forward to racing in Hockenheim. The atmosphere is always phenomenal and the crowd is great. I remember a lot of German flags around the track from last year, which I really enjoyed.

"In terms of the track, it looks quite simple and straightforward at first sight. Especially the last part is very enjoyable but it is also very technical entering the Motodrom. There are a lot of fans there and I think that's definitely the highlight of the track.

"I would say that turn 1 is probably one of the most tricky corners. It is very fast and is over before you notice, so it is important to get a good feeling straight away to set you off on the right foot for the rest of the lap."

Charles Leclerc: "I am looking forward to Hockenheim. Over the past few weekends, we have made some progress in qualifying. Now we have to focus on the race pace because that's where we seem to be struggling the most at the moment.

"As for the circuit, it features some nice characteristics with a mixture of different corner types and straights. The last race was very exciting and fun to experience from inside the car, so I hope we can have another good one in Germany and be able to fight for the win".

Mattia Binotto Team Principal: "For us, the German Grand Prix is first and foremost Sebastian's home race. Therefore we really hope to do well at Hockenheim, especially after last year's race here, when the win escaped us at the end of a weekend where our performance was definitely up to the task.

"We are not bringing any specific updates, but studying the data from the last round in Silverstone has provided us with useful information in our quest to get a better understanding of our car."