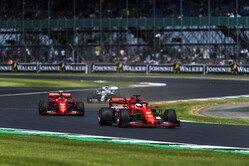 Yesterday's race sims suggest that Ferrari will be hard-pressed this weekend to keep up with Red Bull, never mind Mercedes, both drivers suffering with graining, particularly to the front tyres.

"It was quite a difficult day for us," admitted Charles Leclerc. "We tested quite a lot of things but I feel we have been struggling quite a lot on the race pace today.

"Our qualifying pace was not so bad," he continued, "but I feel Mercedes have probably quite a lot more to come. So it's going to be very difficult, and still a lot of work to do."

With some feeling that Silverstone being a power sensitive circuit would suit the SF90 more than the W10, the Monegasque was quick to dismiss the speculation.

"We tried some stuff with the car and set-up, and the car was quite nervous," added teammate Sebastian Vettel, "on top of that it was a bit windier.

"Not so bothered with one or two particular lap times," he continued. "I think bigger picture today, it was OK, too many jumps for us, up and down, Mercedes looked very, very fast and the ones to beat.

"There's more we can do, definitely," he insisted. "Some stuff we tried didn't work, so we now have to pick the right cards for tomorrow."

"We had very high wear on the front tyres, front left," confirmed team boss, Mattia Binotto, "which somehow is already affecting the single qualifying lap, because if you look, we are quite strong on the first and second sector but somehow weak on the last one, some extra understeer.

"We will be focused on this overnight, trying to address the front wear, and by the times that the car will be balanced I think we will get a better judgment of our overall performance at Silverstone."