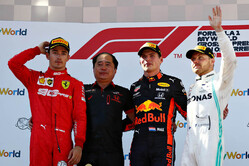 Q: Max Verstappen, what an astonishing race you drove. We see two cars down there from the great Niki Lauda - a Ferrari and a McLaren. A worthy champion of course, three times, a legend in this country, who we recently lost. You and Charles did him proud during that grand prix, congratulations.
Max Verstappen: Thank you. Wow! After that start I thought the race was over. But we just kept pushing hard. Quite quickly I saw the pace was actually not too bad, but I had quite a bad flat spot on my first [set of] tyres. And then after the pit stop we were flying. You can see it now on the straight we had good pace as well so we could make the pass. Of course extremely happy for the whole team and also for Honda. We just started working together this year but to win here is incredible.

Q: It got a little bit cosy, a little bit close during the overtake of Charles. It's under investigations. I'm sure you've been told by the team. What's your point of view on that?
MV: It's hard racing. Otherwise we have to stay home.

Q: So you're really comfortable. Your elbows are out, you took the place and you were up the inside.
MV: Well, I mean, if those things aren't allowed in racing, then what's the point of being in Formula One.

Q: Well, let's just celebrate a magnificent drive, well done. Charles Leclerc I thought your first win was there; so did you I'm sure. Take us through it from your point of view. Perfect start, perfect race until the closing stages.
Charles Leclerc: Yeah, overall I thought the race was good. At the end I had a bit more degradation than I thought so Max came back. Then, on the incident, I'll let the stewards decide. For me it was pretty clear in the car, I don't know how it looked like from the outside. We'll see what the decision is.

Q: You don't feel it was a fair pass?
CL: I don't know. I was the outside, just like the lap before. Actually, the lap before was completely fine. He left a space for a car width on the exit of the corner but he didn't on the other lap, so we touched and then obviously I didn't have a chance to pass back. It's a shame.

Q: Incredible performance still, congratulations. Valtteri, a couple of 21-year-olds today putting on a stunning performance. You're the top Mercedes man, was it a difficult race?
Valtteri Bottas: I think we made the most out of it. It was a bit more difficult than we expected, especially with the overheating of the engine, so couldn't really race properly - had to manage all those temperatures. That's why defending was difficult and also attacking. But, yeah, got some good points. It was one of those weekends, but it's not bad.

Q: Anything you could have done better? The start was reasonable, pace was reasonable but you couldn't stay with those two.
VB: On pure race pace I don't think there was not much difference, but once we had to start to manage the temperatures we were dropping back, so...

Q: Well Max, many congratulations. A great race from you although you didn't make it easy for yourself, dropping back to seventh at the start. First question: how does this win compare to the ones that came before?
MV: It's a bit different again. At the start I had anti-stall. So I guess we set the clutch a bit too aggressive. But yeah, from there onwards, I think my first stint was a little bit limited with the flat-spot I had after lap one - but still, we stayed out quite long and, once we came out again, we had great pace initially. I think we were looking after the tyres a bit, just settling in. Then, one-by-one we were overtaking the cars ahead. The car really came alive.

Q: At what point of the race did you think the win was on?
MV: Difficult to say. I think once I got past Valtteri, with the pace we had, I could definitely have a go at it. But you never know. I just kept pushing really hard - but we did it with a few laps to go so, of course, extremely happy but also to the team. I think all weekend we've been working really well and the upgrades we bought, they've worked really well, so a big thank you to Red Bull Racing themselves, all the boys there - but also to Honda because it's not been easy for them in the past but today it's been incredible, so I'm very happy for them.

Q: Charles, the disappointment must still feel very fresh for you. Can you just give us your thoughts on the weekend as a whole and what positives you can take away from this Austrian Grand Prix.
CL: Yeah, the weekend was positive. Quali was positive, the race though, I feel like we missed something. Quite a lot of degradation again on the second set. So yeah, on that we need to work but overall a positive weekend.

Q: And what about your performance of your car in race conditions versus qualifying. Were you expecting a little more from it?
CL: Maybe a little bit. I think what we didn't expect is Max going that long in the first stint, and then the second stint was harder because we pitted quite early onto the Hard compound.

Q: Valtteri, you celebrate your 50th start for Mercedes with another podium. Great start from you. Did that lay the foundations of this third place?
VB: Yeah, obviously the start was important because, I think, for us to attack any cars ahead was quite difficult today with the overheating issues we had, so had to do big amounts of lift and coast and couldn't actually use any of the better engine modes in the race so everything was on safe mode, just by overheating. Felt like we couldn't really race today, so it was nice to have a good track position in the beginning and actually, in the circumstances today, I'm happy that I managed to be on the podium and also get a few points against Lewis.

Q: (Scott Mitchell - Autosport) Max and Charles, obviously you went side-by-side with each other two laps in a row. Max can you just talk us through how the attack the second time was different, what you did differently? And Charles, do you think that when you did make the contact, you could have done anything yourself to avoid a collision?
MV: I think the second one I braked a bit deeper into the corner. We had a little contact of course, mid to exit of the corner but yeah, from my side I think it's racing. We all know there is a crest in that corner as well. If you take the crest wrong - because we both went a bit straight on - at one point you run out of room but it's hard racing, it's better than just following each other and have a boring race, isn't it?

CL: Yeah, I did the same thing from the first to the second lap. The only thing that changed was on the second lap there was contact and then I had to go wide and I lost quite a bit of time there.

Q: (Christian Menath - MotorsportMagazin.com) Charles, just following that, could you have done anything to avoid the contact, probably go a bit wider and then come onto the next straight a bit deeper or anything like that?
CL: As I said, I've done exactly the same thing from the first to second lap, so I did not expect any contact on the second lap. Yeah, as Max said, I think he braked a little bit deeper. I don't know if he lost it or not but then there was the contact. I felt I was quite strong in traction, from the first attempt I managed to have a better traction and I kept my position. On the second one I couldn't do that because I was off track.

Q: (Luis Vasconcelos - Formula Press) Valtteri, you mentioned the overheating issues but it was clear that the car was also being aerodynamically compromised to improve that situation. Was the team surprised that even with all those openings for cooling there were still overheating issues?
VB: The issues today were definitely bigger than we expected. We knew it was going to be difficult and we would have to do some lift and coast but we never expected we would have to do that big amount and also by not being able to use good engine modes it made quite a big difference. And on top of that there were the aero losses and we were fully open with everything, so quite big losses and aero-wise as well, but the bigger thing was the engine power and the lift and coast.

Q: (Luke Smith - Crash.net) Max, congratulations on your win, how significant do you feel this is for the Red Bull Honda project going forward and I guess the validation of the faith that Red Bull have shown in the Honda project so far?
MV: Yeah, of course I think this is very important for us and also for the future, for Honda as well. I'm just very happy that it happened today and it just gives us a lot of confidence as well to the boys and maybe a few doubts are going away because of it so yeah, at the moment it's an amazing feeling.

Q: (Frederic Ferret - L'Equipe) Max, did you have the time to enjoy the ambiance of the orange army? Did you hear it during the race or at the end?
MV: I think I was a little bit too busy myself, driving, but I could see them going up, like cheering me on. I was watching a little bit, next to the track. You can't miss the orange but of course the in-lap, you see everybody going wild so yeah, I don't know, it just gives me a lot of positive energy going into a Sunday like this, and of course after the start I was disappointed but we never gave up and of course then to come back like this is amazing.

Q: (Peter Hlawiczka - F1News.cz) Valtteri, have you already seen the incident from Charles and Max? And what is your opinion, would you penalise it or was it just a racing incident?
VB: I have not seen anything of the race apart from my own race so I can't say anything. I've seen nothing.