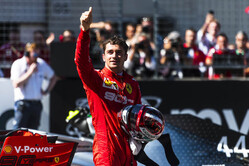 Having spent much of the weekend on the mediums, it came as a surprise in Q2 when Ferrari shunned the yellow-banded rubber in favour of the softs.

With Mercedes and Red Bull posting their best times on the mediums, this means that pole-man Charles Leclerc, and teammate Sebastian Vettel, will start today's race on the less durable red-banded rubber, thereby necessitating an early stop, while their main rivals will be enjoy a longer opening stint on the mediums.

"Charles starting on the soft is a risky strategy," said Toto Wolff. "Because it is either a two-stop if things go bad, or you're very compromised towards the end of your first stint.

"Whereas Red Bull or Mercedes on the medium are in a better place in terms of the strategies available to us," he added. "So, I'd rather be on the medium than on the softs."

"The soft won't have the range," agreed Christian Horner, "and that puts a lot of stress on that tyre.

"Ferrari generate their lap time differently," he told Sky Sports, "they go slower round the corners and faster down the straights, so they might feel confident that they can make that work, because they don't put as much heat into the tyres in the corners."

"The soft looked pretty good so we are pretty happy with our strategy," insisted Leclerc. "It's definitely different than Red Bull and Mercedes but only the race will tell who was right. But I'm happy with it."