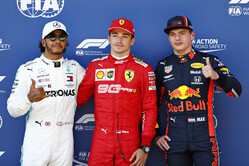 [Question inaudible]
Charles Leclerc: In FP1 I struggled a little bit and then we did some changes and then from FP2 it was quite good. A big pleasure to drive this car on the limit; it just felt great, and very happy to bring the pole position back home. But tomorrow we need to finish the job.

A very different tyres strategy to Mercedes who are going to be your ultimate challenge. You're starting on the soft; they're starting on the medium. Do you firmly believe you went the right way?
CL: Yeah, on actually what we tested in FP2 we are pretty happy with the choice we made, so we'll try tomorrow.

And it's going to be pretty hot tomorrow. What are the conditions going to be like?
CL: It's going to be very difficult, physically, first, because it's very, very warm, but also for the car, so yeah it will be all about management of everything and hopefully a good result tomorrow.

Well done, it was an epic lap. Lewis, that was a nervy session, it looked like everyone was hunting for a slipstream. We heard the team trying to put you in that position, I think you tried to position yourself well for that last run, but Charles did a very good job.
Lewis Hamilton: Yeah, congratulations to Charles, he's been quick all weekend. We've just not really been able to keep up with them this weekend. Positioning was so difficult out there and I was always at the front so I was never getting a slipstream. Luckily on that last lap I was in an OK position, but it was very tight right at the end. I didn't know if I was going to get to start the lap or not. I saw three cars behind me trying to start their lap. So, a bit of a panic, but nonetheless I'm grateful. Max has been driving really well all weekend as well. I think it's cool to see three different teams in the top three positions.

Last Saturday you were keen to get Charles to race. You're up against it tomorrow, you're going to have to fight these two for this win aren't you?
LH: Yeah, I'll go and fight the young 'uns, man! It's cool. I'm representing for the more grown men I guess. Nonetheless I'm excited to get out there and race with these guys, they're both so talented, so fingers crossed we can put on a good show for them tomorrow.

Max, you got the biggest cheer today. Red Bull's home race, I don't think you could have asked for much more. Could be a front-row start, as Hamilton is under investigation for a Q1 infringement with infringement, but how strong was that?
Max Verstappen: Yeah, I'm actually really happy at the moment. For us, this is an amazing result on this track, which is not easy for us. The whole weekend... I think also again with the upgrades we brought here the car seems to be working again better.

You won this race last year and you've put yourself in a strong position. How much does it mean to you to have this support around the track?
MV: It's great. It puts a big smile on my face and hopefully I can give them a great result tomorrow.

Charles, both of those laps in Q3 were good enough for pole position. Tremendous performance by you and the team, just how satisfying is this for you?
CL: Obviously I'm extremely happy. We have been competitive since FP2 but it's always difficult to do a lap when you need to in Q3, but we did, so I'm very happy. We changed a little bit the car after the first run in Q3. I knew it would be a compromise a little bit for the first sector but actually it wasn't that bad and then I improved quite a lot in the third sector, which was nice to see. Very happy for the team for the pole position but it's a shame for Seb, as I think probably the two cars should be closer to first and second, so yeah, a bit of a shame for the team but very happy for my own performance.

And just looking ahead to the race, how confident are you about the race pace of your car?
CL: Well, on Friday actually it didn't look bad compared to Mercedes but also Red Bull, so we are pretty happy I think. We are quite competitive this weekend. I think tomorrow the start will be very important. There is a long straight after it, but there is a long straight after it, but normally we are quite fast on the straights so hopefully we can keep first position in the first three corners, but the pace itself looks promising.

Lewis, it's been a bit of a tricky weekend for Mercedes so far. Great lap from you at the end to get second place but can you just tell us about the performance of you car and how that session was for you?
LH: Well, firstly congratulations to Charles, he did a great job. He's done a great job all weekend. For us, yeah, we've been chipping away at it, but early from the get go we noticed a bit of a deficit to the Ferraris. We thought it would be a bit closer than it was but they eked out some more time in P3 and going into qualifying. We definitely under-estimated how fast they would be, I would say. I think ultimately on the straights, they really kill us on the straights, so they've got that extra bit of power that really works well here and I guess they just managed to figure out how to get their car to work around the medium and high-speed corners. I think for us, the car has been feeling good, but as I said, we can't do much more on the straights and I'm not really quite sure why it is we lose time on the straights but that's something we're working towards. The last part was really difficult. I think there were three cars right behind me going into the last corner, everyone was waiting and waiting and waiting and pushing it to the limit. We rarely go out right at the end of qualifying but as you could see it was quite a bit windier today and I think tow was probably important. Nonetheless I'm really happy with the position to get up here and I'm excited to have a race with these two.

You're under investigation for an incident in Q1 with Kimi Räikkönen, what's your take on that?
LH: One of the team's cars came by and I was braking for the hairpin at Turn 3 and I saw the other one coming so I got off the brakes and tried to go straight on to try and go out the way because I didn't want to meet them in the corner. I don't think I met them in the corner but I think that probably put him off I would have thought, so it wasn't ideal. I wasn't aware that that car was coming so not the easiest.

Max, congratulations on third place. How satisfying is it for you to split the Mercedes this afternoon?
MV: Well, just in general, I think our whole weekend, the performance has been a lot better. Before we came here I was actually not really looking forward to it, to qualifying, because I knew that it was going to be hard - but actually with the new updates we've got to the car, I think yeah, we gained a bit of performance and I was really happy with the car throughout qualifying and I think in the corners as well, we looked very competitive. We do know that we are lacking quite a bit of pace to Ferrari and even to Mercedes of course on the straights but knowing this is not a great track for us, it's still a great result in qualifying.

And there's a huge amount of support for you this weekend. What's it like to have a Mexican wave follow you around the race track.
MV: Yeah. It's a Dutch wave but OK! It's good. It's bringing a big smile to my face, of course. I mean, it's not giving me extra lap-time unfortunately. It's a good motivation to have and I can't wait for tomorrow.

(Christian Nimmervoll - motorsport-total.com) Lewis, just how much to you think the drag is around this track in qualifying and do you think there can even be a benefit for you tomorrow at the start, considering you're behind Charles?
LH: The drag? Oh, the slipstream. I've not really been behind the other cars. In Montreal you saw just how difficult it is to follow a Ferrari, even in the slipstream they tend to pull away. I think the little bit of an advantage they have is a little bit different in qualifying compared to the race - but yeah, I don't even know if I'll be starting where I am now, so we'll wait and see.

(Andrew Benson - BBC Sport) Charles, there seems to be something about you and these tracks with big braking points into slow corners. Is there something about your style that helps you in these? You've had an advantage over Seb all weekend it seems.
CL: Overall, as I said in Paul Ricard, I've changed a little bit the approach from Paul Ricard and I really felt I did a step forward. Then, Austria is also my favourite track, so it might fit a little bit better to my driving style but overall, I think, since Paul Ricard, I did a step forward. And I can feel it in car so, happy with this. Yeah, that's it.