A grid penalty for Hulkenberg 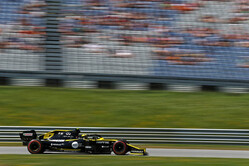 Nico Hulkenberg is to be demoted 5 grid places after Renault opted to give him its new B-spec engine.

The new unit was used by Daniel Ricciardo in France, and due to the fact that this was within the Australian's allocation it was without penalty.

However, Hulkenberg, who is already on his fourth Internal Combustion Engine, will take a 5-place hit, the German having been similarly penalised in Spain when he took on a full complement of components

The German joins Carlos Sainz, who will start from the back of the grid tomorrow after he also took on the latest-spec engine and a full complement of components.

Though the Renaults performed well in the opening practice session, albeit with Hulkenberg losing half his front wing following an encounter with the notorious kerbs, both drivers appeared to lose pace in the chaotic second session.

"The car lacked pace and there's a bit of a question mark as to why," admitted Hulkenberg. "While we're slow on the timesheets, I didn't feel totally comfortable at the wheel.

"We need to investigate what's gone on as it seems a bit odd today," he added. "Conditions were tough, especially in the afternoon with high track temperatures and wind in places. A difficult day for us, but we'll work hard tonight to find some solutions for tomorrow."