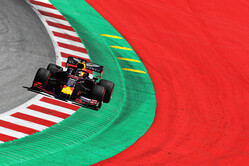 As the session is about to begin it is revealed that plans to revert to 2018-spec tyres have been rejected. While the move required the support of 7 teams, the final vote saw the teams line up 5 in favour and 5 against.

While one has to wonder why the teams couldn't do what Mercedes do and get to grips with the thinner tread, the vote 5:5 vote encapsulates much of what is wrong with the sport.

Albon will start from the back of the grid on Sunday after the Thai driver was given the engine upgrade given to teammate Daniil Kvyat and the Red Bull duo in France last weekend.

In the final moments before the green light, Bottas' car is up on its stand after an oil leak was discovered.

Much to the delight of his many fans here, Verstappen is first out. He is followed by Sainz, Kvyat, Magnussen, Giovinazzi, Russell and Norris.

Sainz posts the first time of the weekend, the Spaniard crossing the line at 14.185.

After last weekend's 'worst race weekend ever' for Haas, Magnussen is a man on a mission, overtaking Giovinazzi and Albon in the same corner.

Gasly, one of a number of drivers who needs a decent weekend, posts a far more sensible 8.299.

As Gasly improves to 7.285, Vettel goes second with a 7.780. Moments later Leclerc demotes his teammate with a 6.970. All three are on the mediums.

As Vettel experiences the sausage kerb at T3, Gasly improves to 6.385 only to be demoted when Leclerc stops the clock at 6.169.

Twenty minutes in and all but Kubica and the Mercedes pair have been out.

Twenty-two minutes in and Hamilton heads out, and with Kubica also on track this leaves Bottas as the only no-show.

Interestingly, three of the five fastest drivers are on the mediums, while the rest are on the softs.

Gasly has damaged his front wing, though it is unclear where, and is back in the pits.

On the half hour, Bottas finally emerges. His first lap, on softs, is an exploratory 7.856.

Meanwhile, Verstappen goes top with a 6.100 on the yellow-banded rubber.

Back on track following his earlier front wing scare, Gasly runs over one of the kerbs and appears to inflict further damage.

Bottas posts 6.206 to go fourth, but moments later Verstappen raise the bar ever higher with a 5.488.

On the softs, Hamilton improves to second (6.010), but remains 0.522s off the pace of the medium-shod Dutchman.

Following a brief stop, Verstappen lights up the rears on his Red Bull laying a nice layer of rubber down for Sunday.

At forty minutes, when the extra set of tyres are handed back to Pirelli, it's: Verstappen, Bottas, Hamilton, Gasly, Norris, Vettel, Leclerc, Ricciardo, Sainz and Hulkenberg.

After several minutes of inactivity, Leclerc and Bottas head back out, sticking with the mediums and softs respectively.

Hamilton, Magnussen and Grosjean head out, all on the softs still.

"Did I break something?" enquires Leclerc, having run over the kerb in the final corner. The Monegasque having re-taken the top spot with a 5.141.

"I asked because I was bottoming more," he reports, only to be told that everything appears fine.

As Hamilton goes quickest in S1, Bottas is the first driver to break the 1:4 barrier, stopping the clock at 4.999.

Hamilton improves to third with a 5.339.

Perez and Stroll head out on the hards, the first drivers to do so.

"I have no front end," reports Hamilton.

Stroll is the latest driver to fall foul of the unforgiving kerbs, the Canadian shedding a portion of his front wing at T4, as Verstappen finally switches to the softs.

Unaware of the damage to his wing, Stroll is told to pit.

Both Alfa drivers well off the pace, as are the Racing Point duo.

"I don't know what's happening under the brakes," says Bottas after taking a rough ride over the kerbs. The Finn adds that he has a problem with front locking.

Norris also switches to the hards, as Hamilton, posts a 4.838 to go top.

"We may have further damage to the front win," Hamilton is told. Indeed, he has, and as a result the world champion pits.

"I took debris off (another) car," reports Leclerc, "please check if the tyres are OK". He is assured that they are.

Told to "box", Raikkonen asks: "Can I just have one more lap?"

Despite missing the first half hour of the session, Bottas has completed the most laps thus far (28).

Leclerc pits, his car sporting lashings of flo-vis as Ferrari continues to try and get the very best from its updates and discover where it has been going wrong.

The cameras pick up on a piece of debris, a large chuck of front wing, and moments later the session is red flagged as it becomes apparent that Hulkenberg has lost the left half of his front wing after running wide in T10.

The session ends under the red flag, but it is resumed in order that the drivers can perform practice starts.

Not the most scintillating of session, the kerbs accounting for most of the excitement. However, while Hamilton is quickest, Vettel, on the mediums, is only 0.144s off the pace.

Bottas is third, ahead of Leclerc, Verstappen, Gasly, Sainz, Ricciardo, Magnussen and Norris.