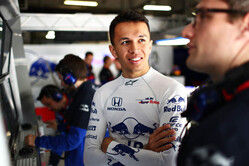 With Honda and Toro Rosso opting to only introduce the latest-spec power unit on one of its cars last weekend in France, that of Daniil Kvyat, this weekend sees teammate Alexander Albon get the spec-3 unit. Consequently, like his Russian teammate at Le Castellet, the Thai driver will start from the back of the grid.

However, looking on the positive side, the youngster, who has regularly impressed this season, insists that by using the practice sessions for testing the Faenza outfit can hopefully look into the issues that have been compromising its pace.

"Obviously it's not the same as a normal weekend when you only have to focus on long runs," Albon told reporters. "But as a team, we can focus a bit more on the long run pace, which maybe we struggled a little bit in Paul Ricard.

"It's not too bad, it just means we can almost treat it like a test day," he continued, "the first three sessions, we can do stuff maybe we wouldn't risk on another weekend."

Asked about his team's prospects this weekend, the youngster replied: "I think like everything, we're always improving, and then it's a fight against the other teams. Obviously McLaren and Renault were very strong in Paul Ricard and we’re hoping to bounce back strong here at our home race."