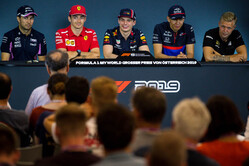 Alex, if we could start with you. Let's start by talking about the frustrations of entering a race weekend when you have an engine penalty. How does that affect your mind-set?
Alexander Albon: Yeah, obviously it's not the same as a normal weekend when you have to focus on long runs. I think it opens the margin, as a team we can focus a bit on the long-run pace, which maybe we struggled a bit in Paul Ricard with that. It's not too bad, because it just means we can almost treat it like a test day, the first three free practice sessions and do stuff maybe we wouldn't risk on another weekend. So yeah, it's OK.

I guess you take heart from what happened in China, pit lane to the points?
AA: Yeah, you could say that.

Now, Alex, we're one third of the way through the season or just over. How do you reflect on the early races and the whirlwind existence that is being a Formula One driver?
AA: Yeah, I think the beginning was quite a shock. I think it's like everything: you start to get used to it. The circus seems a bit more normal the more you do it. By this point now you're in the rhythm, it's not so daunting all the press stuff. It's OK.

What about the car? How long did it take you to get comfortable in the car?
AA: Car-wise, relatively comfortable was straight away to be honest. These cars now they are so fine-tuned that you can get up to speed relatively quickly but then to find the extra bit does take a bit more time. But on top of that it's more about how you speak with the team, how you extract performance with the engineers, that kind of thing. That takes a while, and that's something that I'm always learning really - what does the car need to get an extra couple of tenths on qualifying.

And in terms of performance, what can you tell us about the development of the car?
AA: Yeah, I think like everything we are always improving and then it's a fight against the other teams. Obviously McLaren and Renault were very strong in Paul Ricard and we're hoping to bounce back strong here at our home race weekend. Of course everyone is getting upgrades, so it feels like an upgrade chase at the moment. So we'll see.

Sergio, in France you finished 12th for the third race in a row. You seem always on the edge of the points, just how frustrating is it getting?
Sergio Perez: Yeah, it's obviously very frustrating when you are not scoring points. It's what you come here for and going home with no points hurts a lot. I think we have been going through a very difficult couple of races, the last three especially. But especially in the midfield it's so tight, so a little improvement will be a big jump. I know the season is very long and we are still there or thereabouts in the midfield, so I'm still confident that we can turn around the season.

Do you feel the team is paying the price for the uncertainty of last season?
SP: In a way yes, because you know, these days every team is so strong in the midfield. There are not bad teams anymore or teams that are too far away. Everyone is really there. When you have such tight margins having an upgrade one or two races late hurts a lot. So, yeah, I think we are. But as I say, I'm still very hopeful that we can turn the season around.

And what's this year's Racing Point like to drive?
SP: We're struggling a bit to try to pick up the best bits we have at the moment with the package that we have. It can be quite inconsistent, the car, at time, but nothing unusual, just normal stuff.

Kevin, it's your 50th race for Haas this weekend and probably hoping for a better one that in France last weekend, which was described by your boss Guenther Steiner as the worst in the team's history in Formula One. Is that a description you would agree with?
Kevin Magnussen: It was certainly very disappointing and I think it's because we have had very high expectations for this year. I think all the way from winter testing the car felt so good and looked so competitive. And also, at quite a few races we've had a great car in qualifying and qualified easily best-of-the-rest but then we've struggled a lot in the race. So I think in terms of it being the worst race in the history of Haas F1, I don't know. I think if you ask him now he may see it differently. I think we have had some tough races in Mexico. I remember Mexico is like a bad race for us historically and we've had some really rough races there - qualifying on the back row and finishing almost the same. I wouldn't say it was the worst race but maybe in terms of feeling. It felt very bad, because two races ago we qualified sixth in Monaco and looked very good for a very strong best-of-the-rest position there and then suddenly you find yourself in a tough position - hard to get out of Q1 and struggling massively in the race as well. Yeah, I would say very disappointing and I can see where he is coming from.

What is the mood in the camp coming into this Austrian Grand Prix? Is there a sense of frustration building within the team, both among the engineers and the drivers?
KM: There is a little bit of a sense of uncertainty, because we don't know what to expect. We know we have got a good car aerodynamically and a car that can perform well sometimes but then we've found ourselves in situations where the car isn't performing at all and we can't really point at the problem. It's very confusing. We all talk about tyres and stuff but it is a bit confusing as to why we are so strong sometimes and even on tracks that look the same as, you know say Barcelona, where we were strong, we struggle sometimes. It's not like you can find a trend and zoom in on the problem. It's a little bit confusing but we are working very hard to locate the problem and take a direction of where to look. It's easy to say that the tyres aren't working but there's got to be more to it than just temperatures and stuff. There are a lot of things to look at on a Formula One car so it is a bit difficult at the moment but this track has been good to us in the past, so fingers crossed it's the same this year.

What's your gut feeling about this year, because you were fourth and fifth last year?
KM: The gut feeling is good. It's been strong for us in all years I think. Even when I wasn't here they were strong so... I don't know if it's just a coincidence or if there's something in the track that suits the way we design our car. It's a bit difficult to say. But at least it's exciting to come here knowing that we've had strong races here in the past.

Charles, do you expect to give Mercedes a harder time here than you did last weekend in Paul Ricard?
Charles Leclerc: Oof, I think at the moment it's quite difficult. They seem very, very quick. They were extremely quick in Paul Ricard, especially on race pace. I think we are focusing on ourselves, trying to do the best job possible but to be honest it's quite difficult to be at their level.

How much of a boost was it for you to finish less than a second behind Valtteri Bottas last weekend?
CL: I think he was struggling quite a bit on the second set of tyres with some blistering. We weren't, I think we managed quite well our race. So it shows that still everything is possible but it's just very difficult and if they don't run into issues it is a struggle for us to challenge them. So we are just trying to do our best in our races every time. On my personal side it was good to have a good weekend after a few where I have been struggling a bit more. So yeah, it was nice but now I just need to keep working and keep doing that.

You said in France that you changed your approach to qualifying. Are you confident that whatever you changed will work here?
CL: Oh yeah, I think it's just a general approach. I don't think it's something that I only changed in Paul Ricard and I will probably change it for here. I'm pretty sure it's positive, so hopefully I can show it here too.

And when you are at a track like this, which is the shortest of the year in terms of lap time. How does that change your approach? Does it put more pressure on you during qualifying because the grid is that much closer in terms of time?
CL: I love it. It's one of my favourite tracks actually. I really enjoy having the short track, it really reminds me of the karting days, but no it doesn't put any more pressure for qualifying or less, I just enjoy racing here.

Max, you won this race last year, what chance a repeat in 2019?
Max Verstappen: erm... not that much, I think. Yeah. It's a bit difficult, I think. We need quite a bit of luck for that.

Just tell us a little bit about the performance of the car - because you've now had five fourth place finishes...
MV: Great!

...how frustrating is that for you?
MV: I wouldn't call it frustrating. It's not that I'm miles off. I always have... I don't know if it's a Ferrari in front or a Mercedes but they're not that far away. We just need to keep pushing hard to try to get more performance out of the car but also out of the engine at the moment. We are clearly lacking a bit of pace from both sides. But still, I always try to get the best out of it. And, of course, I'm not here to be fourth. I want to win races. It's not nice to drive around at this fourth spot, always just missing out - but that's how it is at the moment.