Leclerc: We won't give up until it's not possible 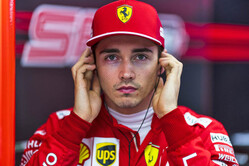 Last Sunday's 1-2, the sixth of the season, saw Mercedes extend its lead over Ferrari to 140 points, while Sebastian Vettel is now 76 points - more than three race wins - behind Lewis Hamilton.

Asked in Spielberg today, whether the time is approaching when the Scuderia must give up all hope of challenging its German rivals this year, Charles Leclerc insisted that this isn't the case.

"We will believe it until the end, of course," he told reporters. "We are all aware the gap is quite big. It'll be difficult to catch up, but we won't give up until it's not possible."

Asked if this might be the case this weekend, he replied: "I think at the moment it is quite difficult. They seem very, very quick. They were extremely quick in Paul Ricard.

"We are focusing on ourselves trying to do the best job possible," he added. "But to be honest it is quite difficult to be at their level. If they don't run into issues, it is troubling for us to challenge them."

"I'm confident we have what it takes," said the German. "We haven't proved it yet and hopefully we will be able to turn it around sooner rather than later, not only for us, but also for you. We are working flat-out, trying to improve the car."