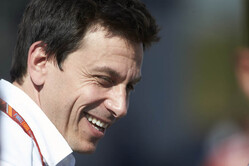 Despite the fact that he is playing down the speculation, the fact is that Toto Wolff is widely seen as the best man to replace Chase Carey when the American's contract comes to an end next year.

While FOM and Carey have refused to comment, many feel that the American's 'Theresa May-like' approach to the sport's management has not worked.

While one would expect criticism of a team boss taking control of the entire sport, citing the possibility of bias, it caught reporters off-guard when Lewis Hamilton voiced such an opinion, the Briton believing that there would always be a perceived feeling of bias.

"I don't believe there's a better manager than Toto within the whole of F1," the world champion told reporters. "However, sitting back as a fan, when you sit in the room with people who ultimately have to make decisions, we as humans are I think, and this is just my opinion, we can be biased.

"You've got Jean Todt," he continued, "I know Jean's level, but the fact is he's been with the red team for so long, so surely when he wakes up if there's a red T-shirt and a silver T-shirt, he probably goes for a red one.

"Toto has been Mercedes through and through for such a long period of time. I don't know if there's anything in that," he admitted. "But if it's a choice of management, I think he would be the best, but I think in the best scheme of things it's someone from outside, who's neutral, if there can be someone who's completely neutral, who doesn't know about Ferrari."