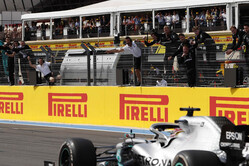 Even those irritating broadcasters hooked on hyperbole had to admit that the French Grand Prix only got interesting at the very end.

Indeed, as Lewis Hamilton cruised to another victory, and title, other than the technical woes of Lando Norris, the only other point of interest was Daniel Ricciardo's Dick Dastardly style moves on the Briton and Kimi Raikkonen in the final laps, and even these were to end in time penalties and demotion.

Fact is, yesterday marked Mercedes 82nd victory since the hybrid formula was introduced in 2014. Of the 108 races held under the new formula Mercedes has won 75.9% of them.

The record for consecutive wins by a team in F1 is McLaren at the start of 1988, when the Woking team won 11 races. Mercedes is currently on 10. Next week, in Austria it could well equal McLaren's record, and go on to beat it at Silverstone.

However, as TV viewing figures continue to fall and fans bemoan the lack of challenge for the Mercedes juggernaut, Lewis Hamilton has said that it is the rule makers who are to blame.

"If you say that it's boring... I totally understand it and I remember growing up watching," said the Briton. "Don't point the fingers at the drivers because we don't write the rules, we have nothing to do with the money shifting, all that kind of stuff...

"Put the pressure on the people that are at the head, who should be doing the job," he continued. "I think they are trying, but for many, many years they've made bad decisions."

It's not the first time the wold champion has criticised the sport, indeed, in the wake of comments made in Canada, when he said the sport should be more challenging, he attended a meeting with the sport's bosses in a bid to give the drivers more input.

"I have nothing to gain by being there but if there's anything I can help... they've been making all these decisions and never once had a driver's input in that room, so if that can be the decisive point that helps shift it and the fans can get better racing, I will be proud to be a part of that."

Asked what happened at the meeting, he admitted: "What happens behind closed doors... obviously I can't say a huge amount about it, but it starts off with the fact that for the first time all the drivers are united.

"We have Alex Wurz who runs it for us because he has a little bit more time than we do and he's a great spokesman for us," he continued, "but we all sit together in a room, particularly after the drivers briefing, and we talk about the issues. Then they bring up the rule sheet and what the things... and we are basically trying to get in the door and trying to be a part of it, and for many, many years they have not wanted us in that room, which I guess is why it's never happened, because they're engineers and they're the guys that make the decisions and we're just drivers.

"But the fact is we know how the car feels and so we have good positive criticism and negative criticism that can only help influence a decision.

"You can't make a rule change about something without having all the facts behind it and what effect it will have and so...

"Anyway, so we just go in there to try and be a guide and if we can be a part of the rudder when they come up with an idea we can say actually that would feel terrible in the car and they would be like 'oh really.'

"They've extended the decision of making the rules," he said of the rules package, which has been delayed until October. "I think they need to because they're nowhere near where it should be in my opinion and they've got to make some serious changes to the decisions that they've already made of how 2021 should be.

"But what I'm encouraged by is that Ross and his team are working - for the first time - on a real aero package that hopefully will have an impact on following, for example.

"But the cars going heavier is not a great thing," he admitted. "We need to get the cars lower, I think.

"People really enjoyed the speed of the cars between the early 2000s I think it was. It still needs to be Formula One, the pinnacle of sport and the fastest cars that there are around the world. So hopefully we will be part of it, hopefully we can make a real cool change and it's not only that, it's the format of the race weekend that maybe can shift a little bit for the fans, it's how we bring the fans in, it's all these things which can be better."